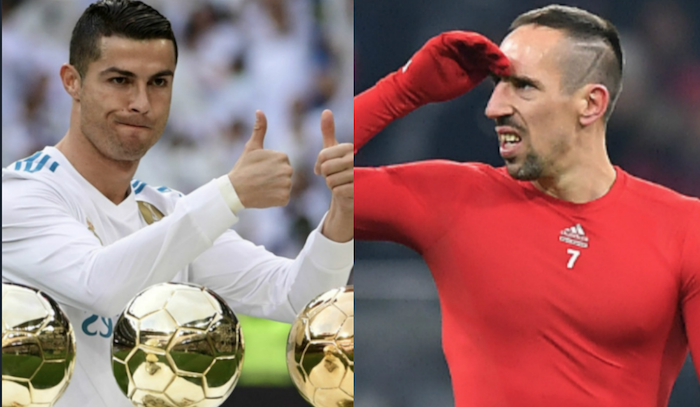 The Frenchman has complained about the lack of support he is given from his homeland, while lamenting the “injustice” of his failure to win the award. Franck Ribery has claimed that the 2013 Ballon d’Or was “stolen” from him. The Bayern Munich star said that it is “incomprehensible” that Cristiano Ronaldo picked up the prize that season after he had enjoyed such a formidable season with the Bundesliga club.

The France winger led Bayern to domestic glory and played a leading role as they snatched the Champions League with a 2-1 win over Borussia Dortmund at Wembley. Such exploits are generally seen to go hand in hand with winning the game’s greatest individual prize, but Ribery’s contribution was overlooked for that of Ronaldo. Indeed, he did not even finish second, with Lionel Messi pipping him for that spot.

“It was as if it was stolen from me,” Ribery told Canal Football Club. “It’s incomprehensible. I won every trophy, I couldn’t have done more. It was an injustice.”

The Frenchman grumbled that he did not have the support of his compatriots.

“I didn’t have my country behind me,” he claimed. “I saw it with my own eyes that the French said Cristiano should win. Did the Portuguese want it to be Ribery or Messi? Of course not.”

Ribery feels that he was made a scapegoat after France’s shambolic World Cup 2010 campaign, in which Raymond Domenech’s side crashed out at the group stage and even staged a strike against their coach by refusing to leave the team bus.

And the 34-year-old still points his finger at the media.