Lady refuses boyfriend’s ₦66.6million GWagon car gift because it wasn’t in the colour she wanted (WATCH) 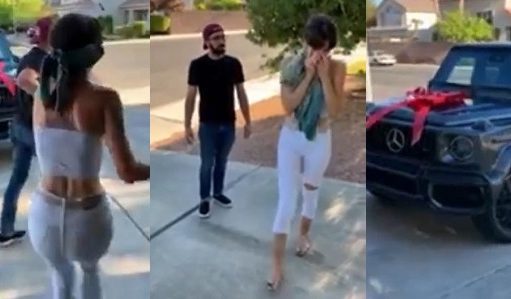 A video currently trending on social media shows the moment an unidentified lady rejected her boyfriend’s G Wagon gift because of the colour.

The boyfriend who bought the N66.6million GWagon to surprise her, had it decorated in a red ribbon, before showing it off to her.

To perfect the surprise he covered her eyes with a cloth, while he led her to the place the car was parked.

To his surprise, when she saw the car she burst into tears. Anyone would have thought they were tears of joy.

However, she burst into tears and rejected the offer, saying it isn’t the color she wanted.

Apparently she was angry at her boyfriend because he did not buy the G-Wagon with the color she wanted.

Her boyfriend who was startled by her reaction to the pricey gift,  stood in shock as he wasn’t expecting her to reject the expensive whip despite its color.