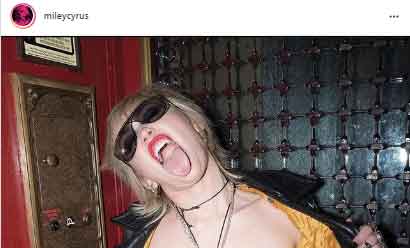 Former American teen actress, Miley Cyrus on Friday left her fans divided about her latest Instagram picture which  was a part of a photo-shoot which she did for Rolling Stone magazine .

While most of her fans praised her for her bold photo-shoot, others thought she shouldn’t have done so. Thousands of people liked her picture in which she is seen sticking out her tongue.

Meanwhile Rolling Stone Magazine wrote on Twitter, “Miley Cyrus appears on our January cover. She opens up about her wild new rock & roll sound, heroes like Joan Jett and David Bowie, sobriety and getting the respect she deserves.”