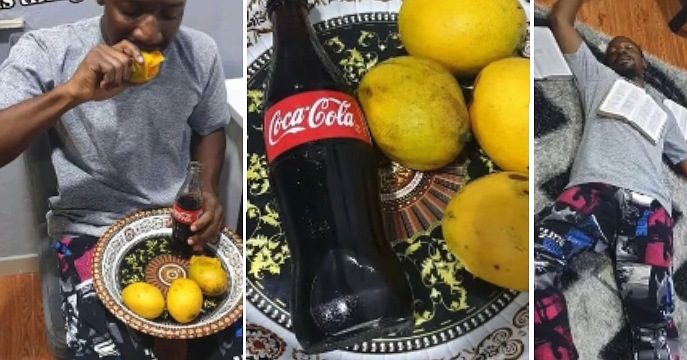 A video of a man taking coke and mango combination has sparked reactions on social media.

In the viral photo slide, the man was spotted taking mango while using a bottle of coke to wash it down.

Apparently, the man wanted to do a live experiment to confirm viral reports about the combination.

What kind of school is this? – Parents reveal what…

It was alleged that a combination of the two could have a dangerous effect on the body.

However, the end of the short clip showed the man lying down on the floor and placing Bibles on his chest and around his body.

The video has sparked reactions on social media as media users share their opinions about the incident.

While some are insisting that it was a very risky experiment, others are claiming that the rumours about the combination are untrue.

Man excited as girlfriend who served him ‘breakfast’, gets dumped by her new lover