Share on FacebookShare on Twitter
There was anxiety and tension yesterday yet again during the Memorial Mass of the late legal icon and eminent Jurist, Justice Chukwudifu Oputa, at the Sacred Heart Cathedral Oguta, Imo State when his eldest son, Mr. Charles Oputa (aka Charley Boy) daringly denied politicians, including Imo State Governor, Chief Rochas Okorocha from political speeches.

Reports say Charly Boy who wore a sullen and agonising look throughout the funeral mass, got up immediately the State Governor, Rochas Okorocha was called to make his speech and aggressively snatched the microphone from the Governor. That he almost fought the Governor for attempting to make his speech at the occasion. This happened shortly after the Secretary of the Government of the Federation, Anyim Pius Anyim, who represented President Goodluck Jonathan, barely finished reciting the President’s condolence message. 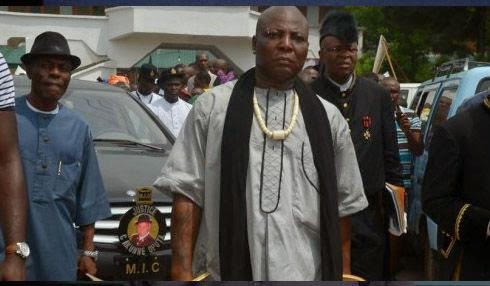 The intervention of the presiding Priest and Catholic  Bishop of Sokoto Diocese, Bishop Mathew Hassan Kukah, could not mitigate Charlyboy’s anger as he insisted that no politician would take advantage of his father’s burial to score “cheap political” goals.Charley Boy had also, during a day of tribute organised by Imo State government recently, walked out on the Imo state Governor when he climbed the podium to make his speech. Consequently the visibly angry Okorocha, stormed out of the Church in the company of his Commissioners and security aides and was besieged at the gate by angry supporters, who berated Charly Boy for  humiliating the Governor. Meanwhile, the Imo State government has released a statement reacting to Charlyboy’s actions. Part of it reads:

It is highly regrettable that the son of the late Justice, Mr Charles Emeka Oputa, aka, Charley Boy threw caution to the wind and turned the church service into a political theater that saw him acting or playing out the script he drafted in Abuja with some Imo politicians who have remained cowed by the overwhelming popularity of Governor Rochas Okorocha.

The Imo State governor had worked together with Mr. Charly Boy both when the late Justice was sick, until the time he died and the preparation for the burial which also encouraged the state governor to make substantial financial input and also organised a special day of tribute for the late Justice at the expense of state government with Charley Boy also present with other members of the family.

This is why the sudden change of character by Charlyboy at the church service, in which case he insisted that the Governor would not talk as protocol demanded could not be understood. Except he was acting out a script handed over to him by some of the gubernatorial aspirants from the state who might have been rattled by the thunderous ovation that greeted the Governor by the crowd when he was first introduced.

At a function like that, protocol demands that the state Governor should talk before any other speaker to welcome the invitees but Senator Anyim representing the President was first called to speak. Perhaps because of the Governor’s Okorocha’s popularity, the few politicians from the state in Abuja who are desperate to capture power in the state saw a willing tool in Charlyboy for them to ensure the Governor will not speak.

We condemn that ugly incident and also wish to advise politicians from the state to stop heating up the polity over power since God is the giver of power. In 2015, God will decide who will be governor of Imo State and when God decides that, there is nothing anybody can do about it.

And for Charlyboy, we ask God to bless him.

Senior Special Assistant to the Governor on Media