Share on FacebookShare on Twitter
There is no sickness that is beyond the healing power of God Almighty. Below is a message OluFamous received from Pastor Tunde Awayinoluwa on his encounter with a Doctor who contracted Ebola: 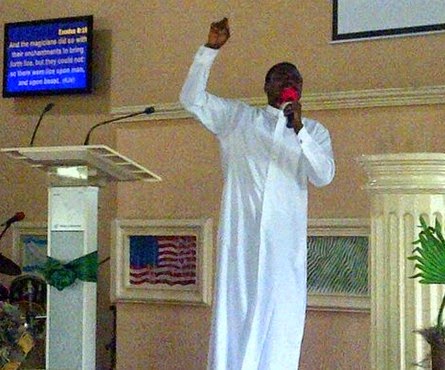 The power of God is awesome, there’s a God in heaven that rules over the affairs of men. One of the doctors that attended to Patrick Sawyer tested positive to the deadly Ebola Virus Disease. The doctors’s phone number was given to me as he was in the isolation center.

I called him, his voice was down because he was weak from stooling, vomiting, headaches and terrible pains on his ankles. I told him there is a name that is stronger than Ebola and that name is JESUS CHRIST! I told him to get a cup of water, I prayed on it converting it to the BLOOD OF JESUS CHRIST and I told him to drink the water.

The next day I called him to speak with him but he did not pick his calls. After a few minutes I called him again, he picked and told me he went to take his bath and I asked him ‘Did any body help you?’ he said ‘No’; I blessed the name of the Lord because that is the process of healing.

I continued calling him and praying with him everyday, and he kept on telling me he is getting stronger everyday. Gradually the symptoms of the Ebola disease began to disappear, he started eating without vomiting. On the 14th of August, they did another test on him, when the result came out he was free of the Ebola Virus disease and so he was discharged on the 18th of August.

PRAISE THE LIVING JESUS, HOW GREAT IS OUR GOD!!
-Olufamous