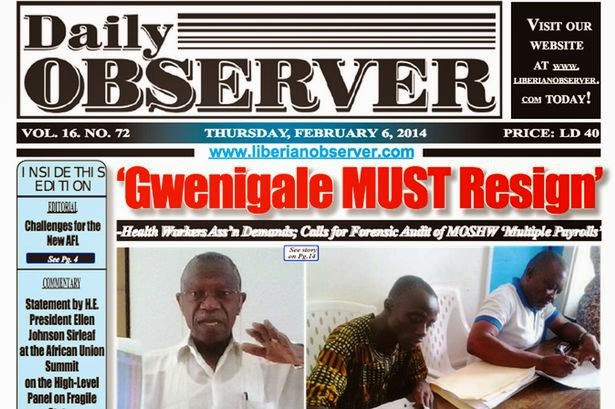 Share
Nothing you will not hear in this world…lol. This report is so silly but the only reason I’m sharing it is because not only did it make newspaper front page news, there are quite a few people in Liberia who believe this story and have expressed shock over what happened. Yes, really!

According to the story, a Liberian mother is claiming her 2 months old son transformed into a full grown man in seconds right in front of her eyes and ran into the bush. The 16 year old mother said she was on her way to the farm carrying her baby on her back on Tuesday September 23rd when the baby asked her to put him down. (2 months-old talk now? lol) When she did, she claims he turned into a man and ran away. For real? Read the full bizarre nonsense story after the cut…

Residents of Foquelleh in Panta District in Bong County were said to have been in unbelievable shock when a two-month-old baby, identified by family members as Smith Freeman, Tuesday, September 23, morning grew into a full grown man and escaped into the bush with his mother’s lappa.

According to the mother of the child, Lorpu Kollie, 16, on Tuesday she and the child were on their way to the farm when the child on her back tied in lappa spoke to her and told her to put him down.

She told the Daily Observer that as they approached the crossroad, the child repeated his call on the mother to untie her lappa and put him down.   As soon as she put the baby down, she continued, the two-month-old boy instantaneously began to grow into a full grown man!

Lorpu Kollie narrated that the child informed her that he (the child) was on his way back home since his grandmother, Lorpu Kollie’s mother, was in the constant practice of raining insult at him.  He even threatened bring incense and garlic into the home.

“This was my first time seeing a two-month-old baby talking so clearly like a five year old child,” Lopu Kollie explained through a mobile phone interview with our reporter.

She told the Daily Observer the baby who grew into man immediately took away her lappa and made his way with it into the bush.

The 16-year-old mother intoned that she had earlier had dreams of her son where they both went into a town and entered a house without doors but they leaned on the house and found their way in as instructed by her son, Smith Freeman.

She explained that in the dream, her son was the one serving guests with the food and her son emphatically warned her not to dare telling the dream to anyone.  But according to her, she revealed the dream to her mother, Gormah Kollie.

Lorpu Kollie was swift to tell this newspaper that Smith Freeman did not have any scar or deformity on his body that could convince community dwellers that the baby was somehow belonging to the dark world.

“The boy told me that he was going back home because my mother had threatened to bring incense into the house. He said the grandmother told him she had the power to drive away any witch craft,  Lorpu Kollie told this reporter.

Speaking earlier to this newspaper, the father of the baby, Watson Freeman said since his girlfriend, Lorpu Kollie conceived, she complained of body and other related pains until she finally gave birth.

Watson Freeman described the mysterious disappearance of his son as incredible and mind-blowing, saying he did not experience any apprehension about him being beyond being a normal human being.

For his part, the grandfather of the baby, Jerome Kowan, said the unexplained vanishing of two-month-old Smith Freeman is the handiwork of the dark world.

He maintained that the situation could stigmatize his daughter and drive away any man who may wish to take her as a future wife.

Meanwhile, traditional leaders in the area have commenced a traditional investigation into the situation and advised people who made farms in the direction to which the baby escaped to stay away for a couple of days and observe.

Story for the gods. Someone needs to be arrested for the missing baby…

See what Pastor Chris did to his wife, Anita Oyakhilome again!! (Look)