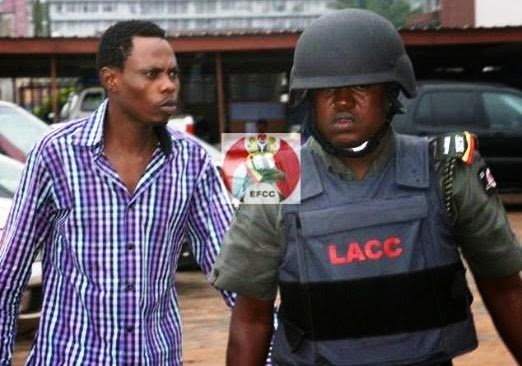 Rukewe, 30, a final year student of Computer and Statistics at the University of Benin, was arrested by officials of a new generation bank on May 28, 2014 in Benin City and handed over to the EFCC for further investigation. “The Economic and Financial Crimes Commission, EFCC, on Thursday, October 30, 2014 arraigned an undergraduate of the University of Benin, Kenneth Rukewe Ebule before Justice E. F Ikponmwen of an Edo State High Court, sitting in Benin- City on a 6- count charge bordering on forgery, obtaining money by false pretence and possession of fraudulent documents.The accused person allegedly duped Sabine Albert, a German, of the sum of $12, 088, 75 through fraudulent claims.

Troubles started for him when Albert alleged that within two months after he had internet contact with him, Rukewe fraudulently obtained the sum of $12,088,75 (Twelve Thousand Eighty Eight Dollars and Seventy Five Cents) from him.

Rukewe allegedly posed to Albert as an English businessman on transit in Nigeria. He gave his name as Bob Albert and told his victim that he had a contract with a Nigerian company worth €1.200, 000.00 and that he needed a loan to facilitate a transaction with the company. He promised to pay back the loan and even doubled it because he was sure of pulling through the transactions. He also told Albert that he had complications and suffered a robbery attack.

Rukewe also falsely told Albert that, a levy of of N1,975,861 (One Million, Nine Hundred and Seventy Five Thousand, Eight Hundred and Sixty One Naira only) was imposed on him by the Federal Inland Revenue Service for the release of his International Passport, and a cheque worth 1, 200,000 Euros. He also pleaded for a flight ticket to London.

Based on all these, Albert offered to loan him the money by sending it through Western Union, only to discover that he had been scammed.

Investigation also revealed that the suspect had defrauded other German nationals to the tune of $110,975.00USD (One Hundred and Ten thousand, Nine Hundred and Seventy Five United States Dollars) between May 2013 and January 2014.

When the charges were read to the defendant, he pleaded not guilty.

One of the charges read in part:
“Ebule Kenneth Rukewe (a.k.a. Bob Albert), on or about the 17th day of July, 2013 within the jurisdiction of this Honourable Court, with Intent to defraud, obtained the sum of $12,088,75 (Twelve Thousand Eighty Eight Dollars and Seventy Five Cents) from Sabine Albert (a German National), under the false pretence that the money represented part payment of N1,975,861 (One Million Nine Hundred and Seventy Kobo) levy imposed one Bobby Albert (a British citizen) by Federal Inland Revenue Service for the release of the International Passport, Cheque worth 1,200,000 Euros and flight ticket to London of the said Bobby Albert, which representation you knew to be false”.

Justice Ikponmwen granted the defendant bail in the sum of One Million Naira and two sureties in like sum. The sureties must be resident in Benin City and must be gainfully employed in Edo State. The defendant must also produce his student identity card.

Justice Ikponmwen subsequently adjourned the case to November 21, 2014 for hearing and ordered that the defendant be remanded in prison custody pending the perfection of his bail.