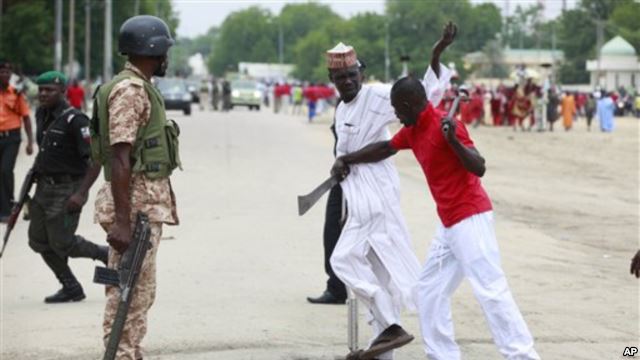 The Nation gathered on Friday from fleeing residents that the terrorist had surrounded the city in preparation for a fresh attack, a development that has led to heavy vehicular traffic in Damaturu/Kano/ Bauchi/Jos high way which is the only safe route in and out of the town.

Aisha Abdullahi, A resident of Damaturu in neighbouring Yobe State, said she almost called off her official trip  to Maiduguri on Friday on seeing the large number of cars going out of the city.

“I almost turned back looking at the way people were leaving  the town.I just don’t know where the courage to continue the journey came from.I prayed all  through the,”  she said.

Another resident, Usman Kakami Bulama  who  said he moved his seven children to Kano State hinted that Maiduguri residents have not been sleeping well since President Goodluck Jonathan’s recent campaign visit to the state.

“I have become worried just like many other people in Maiduguri. The city  has not had this kind of threat of recent until the president came here and left last Saturday. We don’t sleep with our eyes closed any longer and the  tension is growing stronger every day. I have never moved my family  anywhere since this problem started but I am afraid that this time around something dangerous will happen. It is better for my family to leave and I stay alone than all of us staying here. It does not make sense though its painful and the cost implication is also there,” Bulama said.

He added that hundreds of people stormed motor parks on  Damaturu/Kano road on their way out of the city, adding that many of them insisted they might return after the February general elections.

Augustina Andrew who was  travelling to the Southeast with her two children said: “if Nigeria is alive after May 29, 2015, I will come back  otherwise, it is bye bye to Maiduguri.”

However, one Abaganna Yunusa debunked the threat on Maiduguri by Boko Haram, saying:“Let them come inside Maiduguri, they will see fire. The day they enter Maiduguri will be their last day. We are going to kill all of them. Enough is enough. We are tired of them.”

Meanwhile, effort to get a reaction from the Nigerian army proved abortive as the military authorities remained silent on the feared attack.

But it was observed that commercial activities are still ongoing in the metropolis, with banks and schools, both private and public still operating.According to The magazine Newsweek on Friday, quoted John Campbell, former U.S. ambassador to Nigeria and editor of the Nigeria Security Tracker; a tool that monitors violence in the West African countryas saying: “In terms of the encirclement of Maiduguri, we try to track the villages that Boko Haram occupies around Maiduguri and indeed it looks like a noose.”

Boko Haram launched series of offensive on the city last week, an attack that coincided with the visit of U.S. secretary of state John Kerry to the commercial hub of Nigeria, Lagos State, to meet with the two leading presidential candidates, President Goodluck Jonathan and General Muhammadu Buhari (Rtd).

It would be recalled that Chad military forces reportedly reclaimed the Nigerian town of Malam Fatori, Borno State, from Boko Haram insurgents.

Meanwhile, Borno State government has established a committee to distribute 432 free apartments in the Yerwa Peace Estate, Maiduguri, to residents of Bula-Bulim Ngarnam who were victims of the recent insurgency attacks.