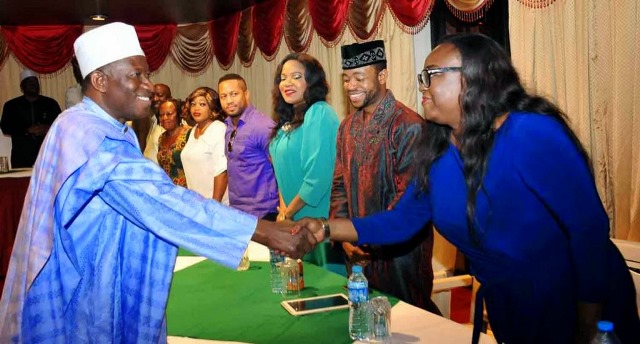 These was revealed to us by an unkown source. According what we heard is that Goodluck Jonathan had a meeting with top Nollywood actors and actresses last week and he offered them N2Billion to support him on his race to be re-elected into office.

They claimed President Jonathan is setting up a presidential intervention scheme to build up and improve the technical and professional capacity in the value of the Nigerian Movie Industry…. (Grammer) . Well lets just believe it is so cause i know if he had done this within the past 6-years in office this development would have gone far than he thinks.

Tagged ‘Project ACT Nollywood and similar to the N3b Nollywood Intervention Fund launched 4 years ago by the Jonathan administration, this new initiative is specially designed to address pressing challenges of poor distribution system and menace of piracy, which are stunting the growth of the Nigerian movie industry.

You may recall that on Saturday, January 24, 2015, Jonathan held a closed-door meeting with top entertainment figures in Lagos. The details of the meeting were not immediately disclosed but according to reports, the federal government last week launched the N2 billion Innovation Distribution Fund (IDF) aimed at improving the distribution of audio-visual content, cutting down on piracy, and better protect intellectual property in the industry.

This is to ensure that those who put their efforts into film productions are properly rewarded and according to a Vanguard report, the Special Adviser, Media to CME, Paul C. Nwabuikwu, issued a statement in Abuja recently that the IDF is targeted at businesses that operate or plan to operate in the film distribution space.

This is with the sole aim of making pirated Nollywood movies unattractive to consumers and experts believe this can only be achieved by ensuring genuine products are easily made available through various outlets.

Applications for the distribution fund are welcome through the Project ACT online web portal which will be operational for a 2 month period having started on January 19, 2015.

Singer Rihanna is pregnant for… (+Photo)

See what Genevieve Nnaji is doing all alone at the River side – You won’t believe this! (+Photo)