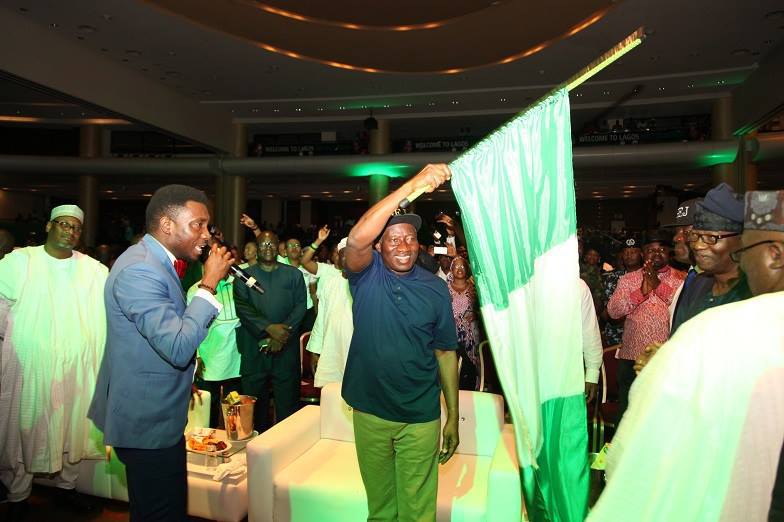 Young Nigerians participated in the Meet The President event in Eko Hotel & Suites, Lagos, on March 1, 2015, Sunday. The meeting was scheduled for 5pm and the attendance was strictly by invitations. The lucky ones would be able to ask President Jonathan questions on the main issues that concern every Nigerian.

Team Naij.com covered all the key moments from the meeting.

21:57 The president, VIPs are leaving the venue.

21:55 A special card is being presented to the Commander-in-Chief. It contains signatures of hundreds of Nigerians who show their appreciation to what the Nigerian Army is currently doing to protect the nation and defeat terrorism.

21:54  “I promise you that we will continue to give Nigerian youths opportunities to serve their country.”

21:52 “Within this space of time, nobody has intervened in Education, Agriculture and Health care more this government.”

21:50 “The PDP states have done wonderfully well. The only states that have built first class airports are the PDP states. Even in presidential lodges across the country, only those of PDP states that are in superb state.”

21:42 “The Asian Tigers (Malaysia, Indonesia and so on) are great because of small and medium enterprises!  It is our mission to create new millionaires among you all through various youth empowerment policies.”

21:40 “The only thing that made to become the President of Nigeria is because I went to school. That was why we made it a priority to establish 12 new universities in the past five years.”

21:38 “Myself and my vice, Namadi Sambo will continue to do things in the best interest of Nigerian youths,” Jonathan said.

21:27 Music marathon continues with Timi Dakolo on stage singing a special song for President Jonathan. Timi is the winner of the first season of Idols West Africa (2007).

21:20 OMG! President Jonathan is now dancing to ‘Shoki’ music with cheers from the crowd. We can’t wait to get photos / videos.

21:17 Nigerian musician from Delta State, Orezi, is now entertaining the crowd with his popular track, ‘Shoki’!

21:14 “The best option for us is Goodluck Jonathan​. The alternative has nothing that GEJ does not have,”the PDP hopeful for Lagos state noted.

21:11 “We can’t afford to have a soldier in civilian clothes at Aso Rock,” the PDP guber candidate said.

21:08 Jimi Agbaje is now delivering his speech: “When Gen Muhammadu Buhari was the Head of State in 1983 I was struggling to have N100 in my pocket.”

21:05 Peter Obi:“Presidency is not a retirement home! Jonathan, carry go!”

21:02 Former Governor of Anambra state, Peter Obi, is the next speaker: “Everybody here is a graduate and someone who wants to rule Nigeria cannot even present his secondary certificate…”

21:00 “Jimi Agbaje will be the next governor of Lagos. An independent governor working for everybody.”

20:58 “Jonathan is the change we need in Nigeria. He is already transforming the entire country through laudable programmes,” Mimiko added.

20:55 Olusegun Mimiko is now on stage at #MeetThePresident campaigning for GEJ.

20:45 Maibasira: “Vote for a man who have shown us love and who believes in investing of people.”

20:35 Obanikoro at #MeetThePresident: “The continuation of Jonathan/Sambo administration is the future Nigerian youths want.”

20:32 “The change we need in Nigeria is to restructure the country. In over 5 years of GEJ’s administration, Nigeria has not witnessed political assassination.”

20:02 The VIP guests still keep giving their speeches to journalists.

20:00 President Goodluck Jonathan walks with a rowdy cheers from the crowd at #MeetThePresident.

19:53 The Q-A part is coming to an end. The president will communicate with the youth at the convention centre.

19:52 “At the federal level we have relatively high number of young people. My future administration will have even more,” President Jonathan said.

19:40 Nollywood actress, Omoni Oboli, while campaigning for President Goodluck Jonathan at #MeetThePresident in Lagos says “no vacancy in Aso Rock”.

19:32 A question to GEJ: Why NOW (meaning the mass offensive in the North East)?

“We had to re-calibrate, since it was impossible to crush Boko Haram with what we had,” Jonathan said.

19:25 The formal part is about to start. All the accredited participants of the meeting have unique numbers. The numbers will be drawn randomly so every young Nigerian has equal chance to ask a question.

19:20 The informal part ended with a selfie.

19:10 The event started with informal questions to Jonathan: favourite colour, favourite food, how many hours of sleep per day the president has?

19:04 Doyin Okupe introduced to the crowd.

19:02 The anchorman introduced Jimi Agbaje to the crowd met with a rowdy cheers.

17:59 SEE exclusive pictures from the venue, as the youth are still waiting for President Jonathan.

17:36 A lot of people are still outside trying to get access to the venue. The event may go into the night.

17:00 The security is very tight. Naij.com journalist took his seat among the first.

It would be noted that Muhammadu Buhari, who is the main opponent of President Jonathan for the March 28 elections, participated in a live event and QA session at the Chatham House in London, UK, on February 26, 2015.

Keysha Cole puts her husband on blast on Instagram – See Why! (+Photos)