Meet the child who has the biggest hands in the world – They are so big! (Photos)

Biggest hands in the world: An eight-year-old boy, who is believed to have the world’s biggest hands, has finally underwent a life-saving operation in Combiatore, Tamil Nadu state, India. Scroll down to see all the photos! 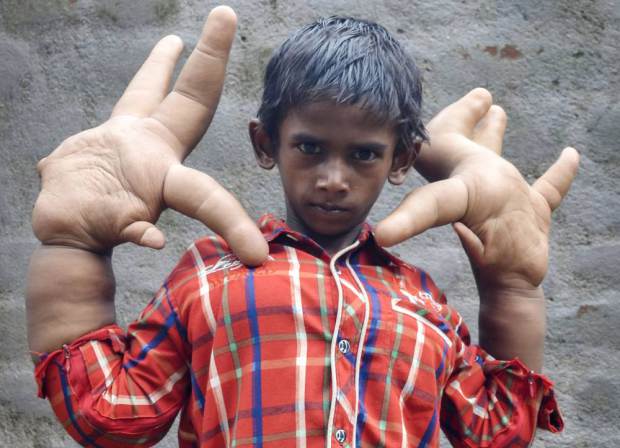 Mohammad Kaleem, from a small village in Jharkhand State, suffers from an extremely rare form of local giantism that causes his hands and arms grow constantly. At the moment of the operation his upper limbs weighed more then 12 kilograms and kept growing.

The boy experiences lots of difficulties – he was not admitted to school due to his scary appearance, he can’t dress himself, eat and take a bath unaided. Besides physical problems Kaleem and his parents also face bullying from their superstitious neighbours.

The locals believe that Kaleem is a ‘devil’s child’ and his giant hands is actually the result of a curse. “There is no treatment for this boy. He is a devil’s child. This is just because his parents must have committed a wrong deed at some point in their life,” one of the villagers said.

After several international newspapers published the boy’s story, a team of medical experts agreed to provide help and perform an urgent surgery. The medics eventually performed a series of complicated operations to reduce the growth of his forearm, hand and fingers, so Kaleem can use them.

After the operation Kaleem’s father Shamim said: “We knew that there is no such thing as a devil’s child. The villagers love to gossip and that is what they are doing about our son. Ultimately, he is our son and we have to take care of him.”

READ ALSO: Meet Giant Man Who Is So Tall He Can’t Even Fit In Bed

Now, the family are waiting for another operation and hope that their son will go to school soon and will be able lead to a normal life.

Prev postNext post
Use your ← → (arrow) keys to browse
Tags: Biggest hands in the worldboychildheadlinenewsODDphotoworld
Share12Tweet8Pin3SendShare