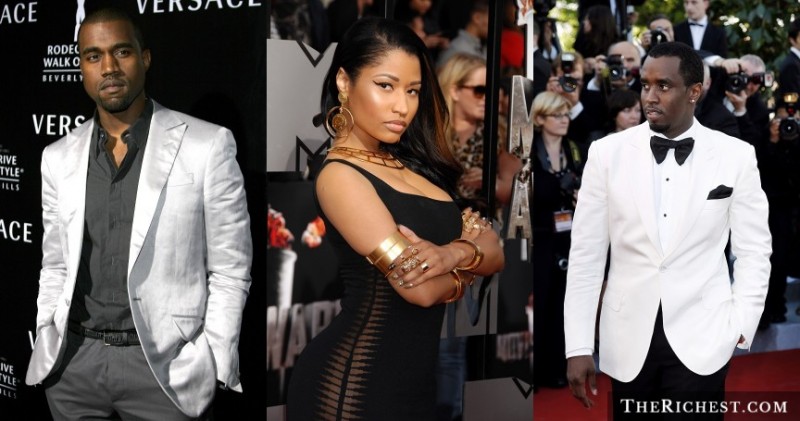 Highest-paid Hip Hop artistes – You may, depending on your age, be more familiar with music that he released two decades ago, but Diddy remains the “Cash King” of hip-hop for 2015. This is according to Zack O’Malley Greenburg of Forbes, who claimed in September of 2015 that Diddy earned $60 million over the past year.

The days of Sean Combs being involved just in the music industry are, of course, a thing in the past, as the artist now known as Diddy is a brand unto himself. A successful clothing line, advertising relationships and an entertainment television station (Revolt) are just a few of the business endeavors that Diddy has outside of the music that he records and produces.

Second on the list is a man who is a legend of the hip-hop industry but who is also No. 2 in fan popularity among artists from his own home. Jay-Z has, in recent memory, become as known as being the husband as Beyonce as he is for all of the noteworthy accomplishments he has achieved during his career. No disrespect meant to the man, but fans do not get a “King Jay” hashtag trending on websites such as Twitter and Instagram whenever Jay-Z releases new material. “Queen Bey,” however, brings up hundreds of thousands of results on social media on a daily basis even if Beyonce has done nothing in the public eye as of late.

Third on the list is Drake, who found himself rather busy over the past year. When he has not been raking in millions of dollars via successful tour stops, Drake has (allegedly) been winning Twitter battles versus other artists. Dr. Dre, the biggest icon in the eyes of diehard hip-hop fans to crack into the top-five of the highest paid artists for 2015, could be even higher on next year’s list due to a movie that was a hit among theater-goers. Last but certainly not least in the top-five is Pharrell, who will seemingly only be on the rise in such lists in the foreseeable future. It would be a safe bet to assume that you should not get used to seeing Macklemore and Ryan Lewis this low in the list of the highest-paid hip-hop artists in the world. The duo that had an incredibly popular hit with “Thrift Shop” is at it again with “Downtown,” which began shooting up the charts at the end of the summer of 2015. Chaz Kangas of LA Weekly wrote in early September of this year that the time has come for everybody to stop hating Macklemore. Regardless of the detractors, they cannot say much negative about the amounts of money he and Lewis have brought in over the past several years.