HIV Aids in Hollywood: 21 celebrities you didn’t know were HIV positive (With Pictures) 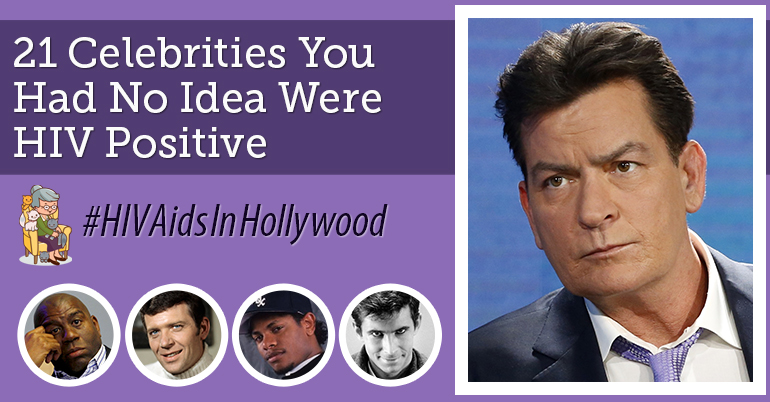 HIV Aids in Hollywood – Charlie Sheen made headlines December 2015 as a curious audience watched in shock as Hollywood’s notorious bad boy announced that he was HIV positive on live television. In an exclusive interview with Good Morning America, Sheen shared the heartache of the diagnosis that occurred just four years ago, which has been treated with a cocktail of medicine over the past few years. Sheen’s announcement instantly made him one of the most notable celebrities to publicize the diagnosis, a brave act by any standard.

Though the disease and treatments have come a long way since the early 1980s, admitting to being HIV positive or having AIDS can still be difficult even today, especially with so much at stake. Add in the spotlight of stardom and the criticism of being a celebrity and this kind of announcement can be catastrophic to any red carpet career, even for someone as wild as Charlie Sheen.

Because HIV can affect anyone, male or female, young or old, celebrity or not, Sheen’s public announcement led us to wonder, “How many celebrities have HIV?” From world renowned athletes and musicians to Broadway composers and political commentators, we found 21 celebrities you probably had no idea are HIV positive. With brave accounts of their diagnoses and treatments to their life stories and even their goodbyes, we’ve uncovered it all.

At just 15 years old in 1968, Andy Fraser made history when he became the founding member and base player for the rock band Free. With a career lasting over an astonishing 40 years, Fraser and the band rocked the world with mega hits including “All Right Now” and “The Stealer”.

First training as a classical pianist until the age of 12, Fraser spent his adult life on the road playing the guitar and living the rock star life. By the early 2000s, Fraser revealed that he had been battling HIV since the 1990s as well as Kaposi’s sarcoma, a rare form of cancer. Disappearing from the spotlight between 1994 and 2005, Fraser made his final return as part of the new Free album titled Naked and Finally Free. Sadly, Fraser lost his battle with AIDS and cancer in March 2015.

Fans bash Toke Makinwa for doing this to her self (+Pics)

The 10 strangest cars in Jay Leno’s garage – You need to see number 1! (With Pictures)