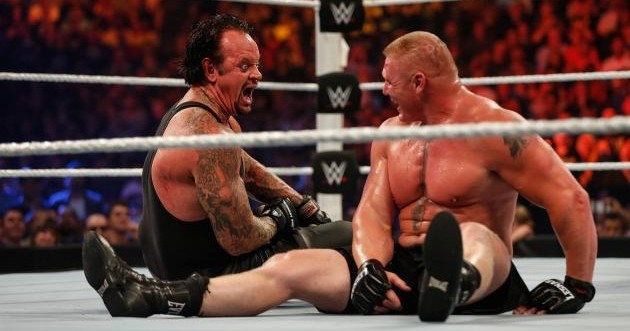 Best Brock Lesnar moments in WWE – What a path of destruction it’s been for Brock Lesnar since returning to the WWE. Following his departure in 2004, many truly believed we’d never see Lesnar in a WWE ring again. After leaving the company Lesnar kept real busy trying out for the Minnesota Vikings and later pursuing a career in the UFC.

Lesnar rose to stardom with the UFC becoming the Heavyweight Champion rather quickly. Brock became must see TV. He later shocked the wrestling world making his long anticipated return in 2012. Brock would quickly realize that being a sports entertainer is really who he is at heart. Lesnar began to get immense reactions by the WWE universe. Along the way there were many tremendous memories that Brock created before and after he returned to the WWE. Let’s take a look at some of Lesnar’s best moments throughout his WWE career.

15) His First Ever WWE Television Debut

It didn’t take very long for the newly named “Next Big Thing” to make an impact. Lesnar made his television debut alongside his manager/agent Paul Heyman. Brock made his debut on March 18, 2002 during an episode of RAW. Lesnar came out of the crowd and brutally attacked Al Snow, Maven and Spike Dudley during their match. This was a sign of things to come. Lesnar was later drafted to RAW, and this would make way for his first ever feud and match in the WWE.

10 Teenagers who changed the world in 2015 (With Pictures)

2016 Prophecies by Pastor E.A. Adeboye of The Redeemed Christain Church of God (A Must Read)