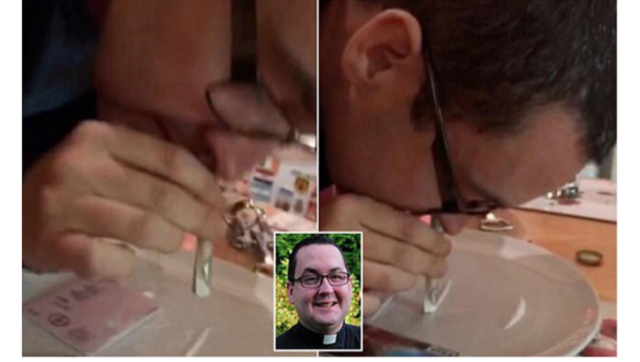 He was in a room containing Nazi memorabilia, and the Irish Sun obtained the video which shows the priest saying

‘I shouldn’t’ before snorting the white powder off a plate. “It was just the one night and that was it. I do not have an issue with drugs,” said Crossman after he admitted to taking the drugs.

As far as the Nazi memorabilia, which included flags, hats and an eagle with a swastika on a plinth, the priest states,

“I’m no Nazi. I collect historical stuff. There’s stuff there from every country.”

In his statement, Bishop of Dromore John McAreavey said that Fr Crossan had asked for and been granted leave from his pastoral duties at Seapatrick parish in May 2015. He said he had been receiving counselling and was considering his future.
At the start of February 2016, the statement said that the priest had asked for an extended leave of absence from the priesthood.

As of now, he is no longer living on church grounds.

Mercy Johnson shares photos of her 2 beautiful daughters and it’s so adorable! (Look)