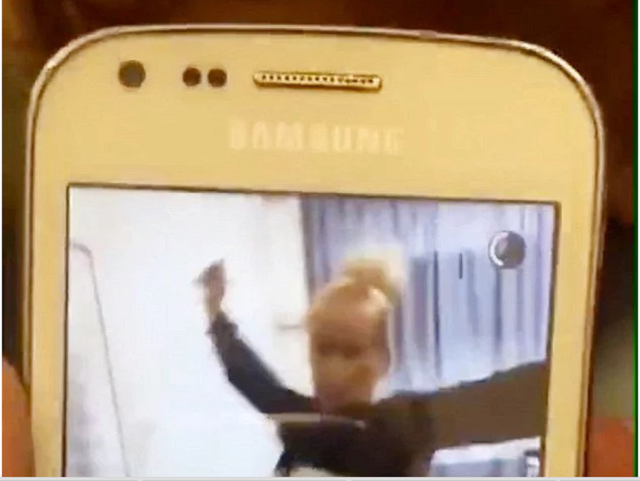 Teacher caught on camera – High school pupils filmed their teacher flashing her bra and performing a bizarre striptease in their classroom. The blonde’s supposedly [email protected] Xx:’y dance has been shared thousands of times on Whatsapp and other social media platforms.

The video is believed to have been taken at the Gramsci Keynes Institute in Prato, Tuscany and has caused outrage among bosses and parents.

Local media outlets said the dancing woman was an IT teacher at the school but did not reveal her identity.

Why the teacher decided to strip in her classroom remains unkown

In the short clip, she yanks up her black top to reveal her white bra.

She then starts bouncing around and dancing as pupils film her.

The teacher is seemingly aware of the camera as she smiles into the lens.

The teachers antics have been widely spread over social media

Headmistress Maria Grazia Tempesti said she was shocked by the footage.

She said the school has started disciplinary action and has summoned other teachers to investigate the case.

The video was first posted on a Facebook page called “Azione Giovani,” or Youth Action.

She now faces a disciplinary and possible sacking

A representative of the group and former student at the school, Philip Balugani, released the footage to the media.

A statement from Azione Giovani said her actions were “better suited to nightclubs than to classrooms.”

School management said it had received no official complaints about the teacher’s behaviour until now.

Maheedah shares video of her bathing on Snapchat (Must Watch)

Senate asks Amaechi to resign, Nigerians react; ‘His madness has no cure’ (Must Read)