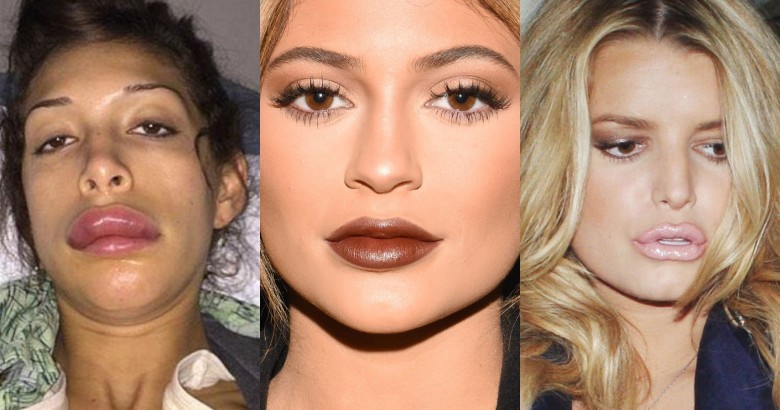 Celebs who have done their lips after Kylie Jenner did – Kylie Jenner, 18, caused a media frenzy when the reality star/lip kit connoisseur suddenly started sporting a bigger pout, claiming it was due to over-lining her lips with liner. After a few months, Kylie gave up the jig and admitted to having had her lips filled on E! Network’s Keeping Up With The Kardashians.

Kylie stands her ground saying that she didn’t lie about having her lips done, she did begin exploring the idea of bigger lips by over-lining her lips with lip liner. Plus, she technically never denied having lip fillers.

Kylie caused such a stir mostly because the teen was under the age of 18 at the time of the procedures. Kylie told Cosmopolitan in an interview that momager Kris was “super-against” the procedure. Kylie explained, “but I begged her and begged her and she finally let me do it.” She claims her thin lips were a longtime insecurity for her and she wanted to do something about it. Many thought she was going overboard, but others couldn’t get enough!

There has been a rise in popularity of lip fillers, lip plumpers, lip suction devices – you name it. Ladies everywhere are dying to get that perfect Kylie pout.

Being a Kardashian, Kylie capitalized on her lips’ new fame, creating her own line of lip liners, lip sticks, and glosses – Kylie’s Lip Kits from her own makeup brand, Kylie Cosmetics. The line of lips kits has been a major success with fans and makeup addicts around the world, selling out in record times.

Lip injections have long been a favorite of celebrities and the elite. Now everyone wants the big lip look. Fans of the youngest Jenner, even went as far as to create the “Kylie Lip Challenge” in late 2015 which went viral on the internet, and also terribly wrong for some experimenters.  Every woman who wants the look has been searching for the right lip liner, plumper, or filler that will get them that perfect pout. What celebs have been most recent to jump on the lip plumping bandwagon? Ellie Goulding has been all over the tabloids after appearing on the red carpet at the Grammys after some obvious alterations to her face. The singer appears to have had a breast enhancement, some lip plumping, and possible cheek fillers. The singer has totally revamped her look and has ridden herself of all her previous insecurities. But did the singer go overboard with the procedures? Fans were not shy about sharing their thoughts with her on Twitter: “She looks older like mid 40s and didn’t even recognize her.”