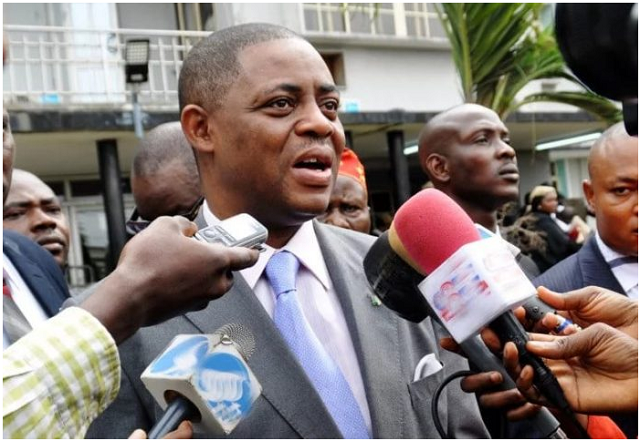 Recall that the president recently directed the Nigerian National Petroleum Corporation (NNPC) to begin the search for oil in the north-east.

Garba Deen Muhammad, the spokesperson of the corporation, in a statement on July 25, Monday, said it is stepping up measures to enable a successful operation in the current search for crude oil in the Chad basin and other parts of the inland substance basin.

According to him, this is in line with Buhari’s order “for deeper inquest into the prospectivity of some hitherto neglected finds in some areas in the North Eastern part of Nigeria”.

However, Fani Kayode reacting to Buhari’s directive via his twitter handle on Thursday, August 11, said if the president finds oil, he and the north will be the first to call for a breakup of the country.

The former minister added that if Buhari fails to find oil in the north, the northerners will continue to be the greatest obstacle to the restructuring of Nigeria.

He also said without southern oil the north is nothing.

My prayer for Nigeria is that oil is found in commercial quantities in the core north.I am glad that @MBuhari is looking for it desperately.

If he finds it he and the north will be the first to call for a break up of the country. If he fails to find it they will continue to be the

of our country. Why? Because without southern oil the north is nothing.

Meanwhile, Niger Delta militants have continued their attacks on oil and gas installation in the Niger Delta region.

The Niger Delta Greenland Justice Mandate recently carried out its threat by blowing up oil installations in the upland of the Niger Delta region.

The destruction of the pipeline was carried out on Wednesday, August 10 which is less than 48 hours after the group issued a threat to carry out its planned vandalism.

The Punch reports that the group claimed responsibility for the attack and said it was part of its “Operation Zero” which is aimed at demolition of oil facilities.

The group had issued a deadly warning to the president Muhammadu Buhari-led federal government on Tuesday, August 9 that in a few days, refineries in the region will be destroyed.

In a another development, four major blue-chip Nigerian companies have lost as much as N51.86 billion in the first half of 2016 as the economy continues to take a dip. A report by The Guardian detailed how the hope of the manufacturing sector is getting bleaker by the day as their earnings dim.

The report stated that the firms are grappling with input cost pressure and weak consumer purchasing power, while hope for improved earnings in the second half of 2016 are fading away.

Nestlé Nigeria Plc, Nigerian Breweries Plc, Dangote Cement Plc and Lafarge Africa all suffered combined profit losses to the tune of N51.86 billion in the first half of the year.