12 Behind the scenes pictures of WWE Wrestlers on their days off that will shock you! 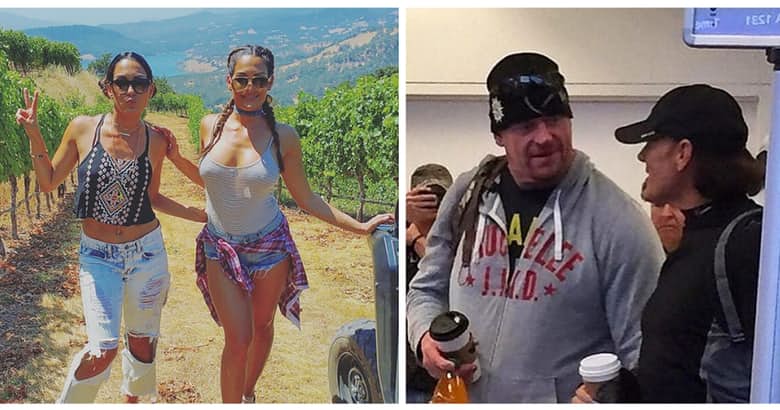 Behind the scenes pictures of WWE Wrestlers – If anyone could use a day off, it would be a WWE wrestler who typically is on the road 300-plus days a year. Whether it’s going to their next city to wrestle, a media appearance, or outside opportunities, these guys and gals are always on the hustle to make it to the top of the mountain. People like John Cena and The Miz are two prime examples of wrestlers who are constantly on the road.

For Cena, aside from wrestling, he’s doing numerous Make-A-Wish appearances, along with guest hosting morning talk shows or reality shows, like American Grit. While The Miz is doing his best to break into Hollywood and will do literally anything for the company, including dressing up like a chicken for a KFC commercial.

Wrestlers tend to cherish their days off and if you follow any of them on social media, they usually will take in the sights of whatever city or country they are in, maybe hit up Disneyland, or just get back home to chill with their family for a day or two. Of course, even on their days off there are still fans that swarm them and take pictures pretty much anywhere they go. It comes with the territory and allows us a candid look into their personal lives outside of the ring.

So, let’s dive into fifteen pictures that show off what wrestlers do when they aren’t inside the squared circle!

A trip to the Apple Store you say? Yes, even John Cena must wait patiently for his girlfriend to figure out what’s wrong with her iPhone, staring off in the distance, wondering how much he could dead lift. If you follow Total Divas at all, you will know this is a rare occasion as Cena is constantly on the road, often away from Nikki. When Brie was still wrestling for WWE, Nikki would want to room with her because her man was gone and she didn’t like being alone.

With Brie now on break, Nikki has to find someone else to hang with now that she herself is back to wrestling on SmackDown, returning recently from a career-threatening neck injury. Even though she missed the opportunity of being the first SmackDown Women’s Champion, (that honor went to Becky Lynch) it looks like Nikki will get right back to where she left off, challenging for the title. Cena is currently off SmackDown and will miss the upcoming Backlash PPV and is working only a number of dark matches or house shows before going off to film the second season of American Grit.