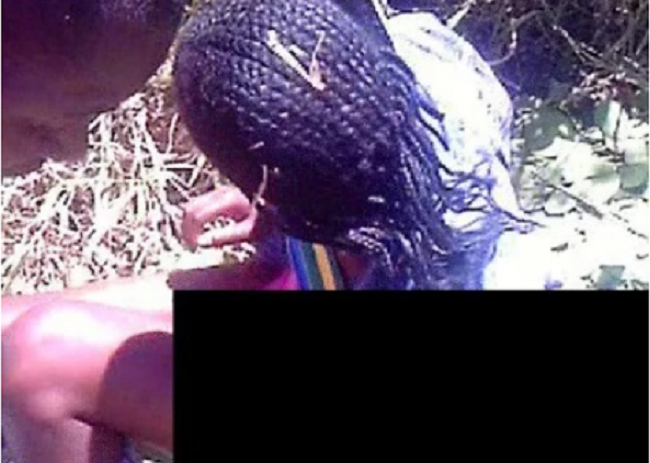 Schoolgirls caught pants down in the bush – Some female pupils at a school who have been fighting for the love of a female teacher at the school, have been caught [email protected] down engaging in lesbian s*x in the bush. A female teacher at Zwangendaba High School in Matabeleland North of Zimbabwe, has been caught up in a lesbianism storm amid claims that some schoolgirls were fighting over her after she proposed love to them.

FUTO students test the Missile they made themselves, then… “I can confirm that we received a report of that nature from Zwangendaba Secondary School. A report was made and because lesbianism is a very sensitive topic to deal with, we have assigned investigators to monitor the situation in the school,” said Mrs Manjere.

A source, who is a school development committee member, said the allegations of lesbianism at the school started when the teacher (name supplied) arrived at there two years ago.

“Parents are furious about this bad habit which has suddenly blossomed in the school since the arrival of that teacher resulting in girls constantly fighting over the teacher or their girl partners.

She arrived at the school about two years ago and since then all hell broke loose, with most girls’ behaviour having taken a new twist.

“The teacher, who is in her twenties claims to be married but she has never been seen with her husband and now rumour says she’s in a process of divorcing the unidentified man.

“We took the matter twice to a district education officer, who is now retired (name supplied) but no measures were taken to rectify or investigate that. Last term, we held a hearing, with some provincial officials, where four pupils openly divulged what they had been doing with the teacher but nothing was done,” said a source.

A parent, Mr Mandla Mpofu said some girls have previously fought over her.

“When our children came home telling us what is happening, it all sounded like a movie but pupils have reached an extent of engaging in fist fights for the teacher who proposes love to many of them all at once,” said Mr Mpofu.

He added that some girls at the school were turning to lesbianism due to the teacher’s bad influence.

“Last year, some school boys found two Form Three girls ‘making love’ in the bush and they thoroughly beat them up and the one who acted like a man almost died. The parents of that girl, failed even to report the assault fearing that their child could be arrested.

“Girls are constantly fighting now. This is a very big embarrassment and our community is being spoken ill of and we demand that measures be taken to put this to end,” said Mr Mpofu.

9 Nollywood stars who ventured into music and failed completely! (With Visuals)

Tiwa Savage puts her big bum bum on display as she poses in a toilet in Australia; Says it’s bigger than bombay! (See Photos)