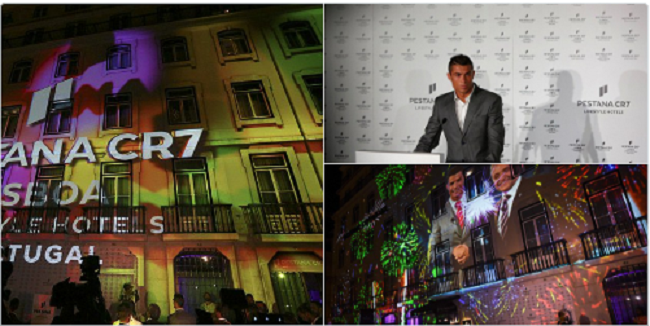 CR7 Lisboa Hotel in Lisbon – Cristano Ronaldo has opened another hotel in Portugal  – Ronaldo follows up his hotel in Madeira with another in Lisbon  – The Real Madrid goal poacher is also expected to open hotels in Madrid and New York  – It costs at least €200 to stay at the Pestana hotel for a night.

Real Madrid’s Cristiano Ronaldo has finally launched his hotel in Lisbon which is in partnership with Pestana.

Speaking at the launching, the 31-year-old says he still sees himself playing for another decade or so.

“Life is not just about football,” Ronaldo said. “Although football is my grand passion, I must start to think about the future. I don’t have many years left, about 10 more or less, so I must look to the future.”

The 82-room Lisbon hotel is the second opened under the relationship between Ronaldo and established Portuguese chain Pestana, with the first being located on the player’s home island of Madeira.

It costs €200 to stay at the hotel for a night and up to €1,250 for a stay at the rooftop CR7 suite, which is equipped with a 48″ HD TV, PlayStation 4 with virtual reality glasses & games, and cardio work-out equipment.

The Pestana CR7 Lisboa website explains: “The CR7 experience begins as soon as guests step in the lobby from the animated screens in the lifts that explore Cristiano Ronaldo’s life story to the surround sound sensors in the staircases which project the sounds of cheering fans in a football stadium.

“In the rooms, the world of sports continues with a detailed sequence of seven footsteps on the carpets that replicated the real sprint of Ronaldo.”

Marca say that €15 million has been invested in the partnership between Pestana and Ronaldo, with two more hotels planned for Madrid and New York.