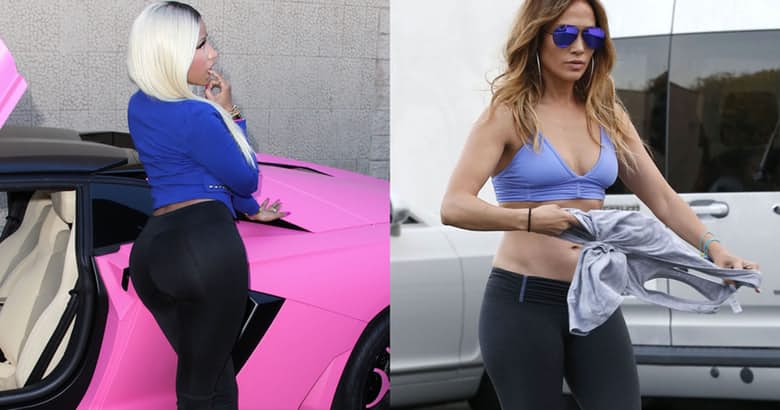 Yoga pant photos of female music stars – Celebrities are photographed almost at any moment which inspires them to work out pretty much every day. Much like us, celebrities wear workout clothes like yoga pants while they’re getting their sweat on.

Also like us, musicians and celebs wear yoga pants while they’re just grocery shopping or pumping gas because they are such a comfortable fashion choice. Aside from regular workouts, most musicians on this list spend a lot of time in they dance studio which really gets their glutes ready to squeeze into yoga pants.

Companies like Alo Yoga and Alexander Wang have made yoga pants worthy of a high fashion-centric musician like Rihanna and Nicki Minaj. Stars like Taylor Swift and Kylie Jenner have been photographed in Alo Yoga leggings in the past year bringing their company to new heights.

Aside from wearing yoga pants tons of stars have started their own fitness wear companies like Fabletics by Kate Hudson and CALIA by Carrie Underwood. With all of these new brands emerging we’re sure that the yoga pants and tights trend isn’t about to end anytime soon. That means many more years of celeb photographs of yoga pants fails and great successes like this one that we’ve compiled of musicians who look dang good in their yoga pants.

Pictured here on her way to the gym, Katy Perry adds a little sports enthusiasm to her form-fitting spandex workout outfit. Although she grew up singing in church the pop star tends to pick more risque wardrobe at this point in her career. After her fourth studio album Katy Perry can officially be considered a member of the A-list which gives her more freedom to explore with her music.

She told Ryan Seacrest in an interview that her next album would arrive, but she was taking her time getting to know new styles and producers. Most recently Katy Perry has been seen performing at multiple Democratic rallies for Hillary Clinton as she ran for President in November 2016. Although Clinton lost the election to Donald Trump, Perry continues to show her support for the Democratic nominee. Other stars that joined Perry on the campaign trail are Beyonce, Jay-Z, and LeBron James.

12 of Conor Mcgreggor’s most notorious moments (With Pictures)