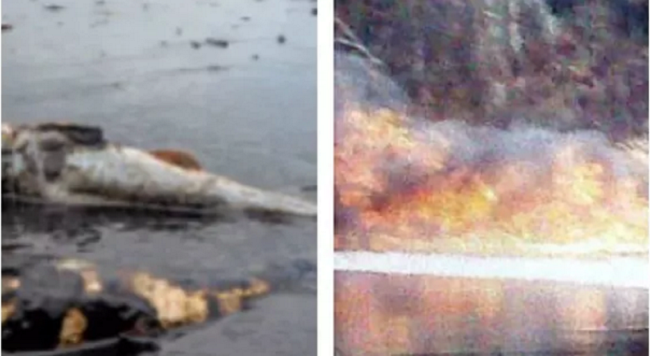 The Punch reports that the pipeline which is operated by Shell Petroleum Development Company in Burutu local government area of Delta state was blown-up on Wednesday, November 9.

Communities around Ogulagha Kingdom have reportedly suffered the effect of the oil spill.

A military source who spoke on the condition of anonymity said the technical team from Shell battled the oil spill for two days trying to curtail the spread of crude oil.

Militant group, the Niger Delta Avengers claimed responsibility for the attack in a statement.

The spokesman for Avengers, Mudoch Agbinibo, in a series of tweets via his twitter handle, @agbiniboND, on Wednesday, November 9, said the attack was to warn oil companies in the Niger Delta region from carrying out repair works on any damaged line.

The militants who accepted amnesty gave up their guns to the state government on Tuesday, November 15.

Governor Nyesom Wike who extended amnesty to the militants said those that refused have now been declared enemies of and called on security operatives to go after them.

He said: “But to show that Government is serious, I hereby disband all vigilante committees in the various communities. I direct the security agencies to make sure that we don’t have such committees except they profile their members to prove that they don’t belong to any cult groups.