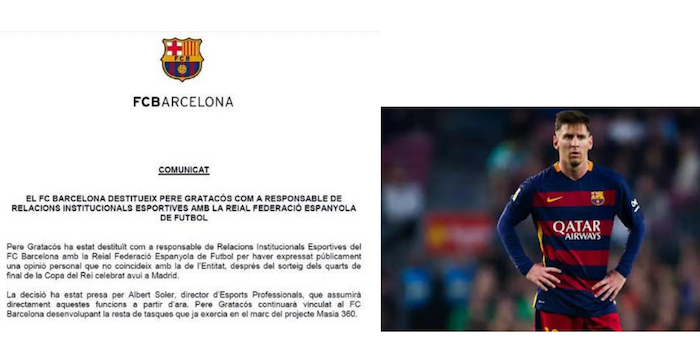 A Barcelona club director has been sacked by the club after he claimed Lionel Messi wouldn’t be so good without the help and presence of teammates Iniesta and Neymar, comments that the club claimed didn’t agree with the club’s own line of thought. Lionel Messi has 18 months to run down on his current contract with Barcelona and has been linked with a transfer out of the club. 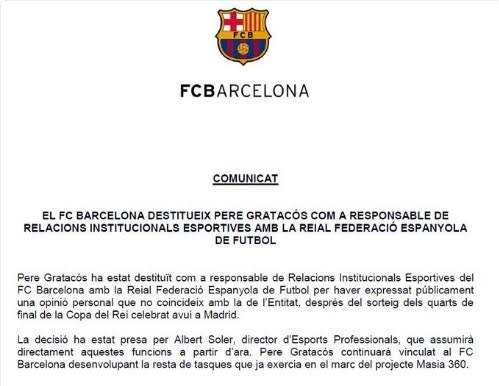 Following recent comments by a Barca director that they need to be financially sensible to decide whether to keep Messi or sell him, the club is eager not to do things that’ll further increase tensions between Lionel Messi and the club and acted swiftly to relieve the director of his duties.

Pere Gratacós, a Barca club director, who was head of Sports Institutional Relations with the Royal Spanish Football Federation, made the comments after the Copa del Rey quarter-final draw.
Gratacos claimed Messi would not be as good without his teammates, despite the Messi’s role in the win over Athletic Bilbao , .
“Leo is one of the most important people in the team, but it’s not just about him,” he said.
“He would not be as good without [Andres] Iniesta, Neymar and company, but Messi is the best.”
Th club released a statement saying; “FC Barcelona have dismissed Pere Gratacos as head of institutional sporting relations with the Royal Spanish Football Federation for having publicly expressed a personal opinion that does not match that of the club after the draw for the quarter-finals of the Copa del Rey held today in Madrid,” the Catalan club said in a bizzare statement:
“The decision has been taken by Albert Soler, director of professional sports, who will assume these functions directly from now on.”

I swear to GOD, I will slap you with that ring – Sarah Ofili to Ikechukwu