HurtBae: Watch the video of a cheating guy being confronted by his ex that broke the internet (MUST SEE) #HurtBae 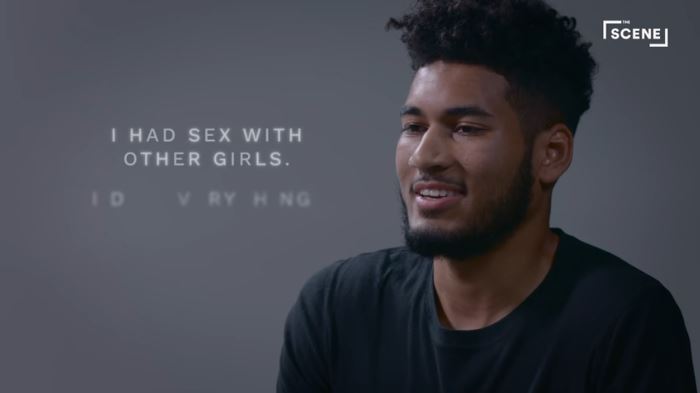 HurtBae: In the nearly 7-minute clip posted by The Scene, Kourtney calmly meets face-to-face with her former boyfriend to discuss how his multiple affairs resulted in their breakup.

While the couple started by smiling and reminiscing about how they met, Kourtney was soon crying.

“I would go through his phone, and I would see text messages or pictures of girls. Then, I would ask him about it, and sometimes you would lie,” she tearfully told him.

Man catches his 17-year-old wife in bed with policeman, see…

She even recalled a time she caught him in his room with another woman, and when he couldn’t answer her question about how many times he cheated, she left the room for a few moments weeping. See video and reactions below:

He cheated on her. Now she wants to know why. pic.twitter.com/5hdlpKisjZ

Reactions: People were filled with rage…

*Nigerian men after rushing to watch #HurtBae video*
“I even thought it was something serious… Mschew” pic.twitter.com/RvKAfJiiZh

if i walked in on my man cheating and he had the audacity to tell me to leave the room #hurtbae pic.twitter.com/RUuEdRJxzx

When she said “because your my bestfriend”, but we all knew she really meant “because I love you” ? #hurtbae pic.twitter.com/9W2X8Ma1zq

IF HE COULDN’T COMMIT THEN WHY DID HE NOT LEAVE INSTEAD #hurtbae pic.twitter.com/dtbtGdCrja

If you are not serious don’t get started. Don’t awaken a woman’s heart if you have no intentions to love her right.

My face when dude told #hurtbae “And I hope we can still be friends one day” pic.twitter.com/dnop7JVERQ

“i forgave you”
“why?”
“because you’re my best friend” #HurtBae pic.twitter.com/tirKyhT6NY

Dude calculating how many times he cheated on her as she’s crying ???#HurtBae pic.twitter.com/NWtBougtwi

Her: “I don’t think you’re a bad guy because you cheated, I forgave you”
Him: “Why?”
Her: “Because you’re my bestfriend”#hurtbae pic.twitter.com/zX6C8M5riC

How she was vs how I would have reacted. #HurtBae pic.twitter.com/K1FFAIOyaN

“How many times did you cheat on me?”

#BBNaija: TBoss refused to give me her v*brator and I forgot mine at home – Bisola to Biggie