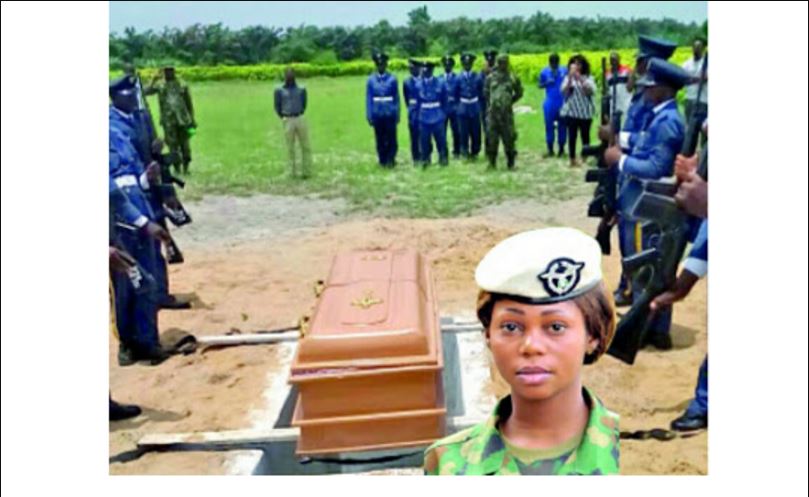 Murdered air force lady: Parents of the slain aircrafts woman in the Nigerian Air Force, Solape Oladipupo, Mr. and Mrs. Tolani Oladipupo,who was killed by her colleague and lover, Bernard Kalu on March 12, has revealed how the family made frantic effort to prevent the cruel fate that befell their late daughter after they received a prophecy, which warned deceased against engaging in any romantic relationship in her place of work. Solape who was popularly known as Shomzy was murdered by her obsessed lover over the suspicion of infidelity in Makurdi, Benue State.

Apr 22, 2020
Mrs. Oladipupo told Sunday Sun in Ijebu Ode, Ogun State that the family received a prophecy warning the deceased against engaging in any relationship with anybody at her base in Makurdi, as such relationship could spell doom for her.
According to her, the late Solape who was already dating Kalu, her eventual killer before the prophecy, was said to be working towards extricating herself from the doomed relationship when she was murdered.

“We were given a prophecy in our church to tell her not to ever date anyone where she worked and we told her. That was when she decided to part ways with Kalu. We didn’t know it was going to lead to this. Even one of her uncles called her to tell her. I think that was how she took the bold step to tell Kalu she wasn’t interested in the relationship anymore. We didn’t know it would result in this. Her father and I gave her a stern warning not to ever get involved in any romantic relationship with anyone within her base,” she said.

Meanwhile, the slain aircrafts woman was, last Thursday, buried at the cemetery in Ojo Military Barracks, Ojo, Lagos. Her corpse was flown from the Makurdi Air Force Base to Lagos where family members and friends gathered to pay their last respects.
The deceased’s mother collapsed and fainted as the remains of her daughter was being lowered.
Speaking in an emotion-laden voice shortly after Solape’s remains were interred, the deceased’s father, Mr. Tolani Oladidupo, who described her death as a huge loss said getting justice for the deceased would be a major source of succour for the family.

“Her death is a huge loss to us and we can’t just express how much of pains and agony we share as a family over the death of Solape. You can see that I am just trying to be a man, pacifying my wife and children. I insist that what can provide a kind of succour to us as a family is to see government do something about the case.
“I can say her death is our own sacrifice to the sovereignty of the Federal Republic of Nigeria. We cannot wake her up again and I am not here to trade my late daughter, but the government should do the needful,” he said, insisting on death penalty for his daughter’s killer.

Meanwhile, Sunday Sun reliably gathered that the deceased already has a five year-old daughter. Solape was said to have given birth to a girl, who currently lives with her parents, when she was 16 years old.
My late daughter had a kid, says mother of slain Air Force woman.
How did you get the news of your daughter’s death?
When I received the new I became unconscious and fainted immediately. When I was resuscitated, it was still like a dream to me. I still spoke with her the day before she was murdered. I have lost over 70% weight, right now. When we were talking that night, she even said was going to speak with her daughter, and she did.
You mean she had a child already?
Yes (showing our reporter the child).
What’s the name of her child?
Her name is Bisola Ogunyemi.
And as it is now, how are you taking the loss?
The person who killed my daughter won’t go unpunished. He has said he was going to die too and he should be made to die. In a situation where Kalu’s family hires a lawyer to defend him, I will view it as an attempt to cheat us. I know justice would still prevail.
Did you have any premonition that such a thing would happen?
I have never thought I would lose anyone of them at all. In our church, we were given a prophecy to tell her not to ever date anyone where she worked and we told her. That was when she decided to part ways with Kalu. We didn’t know it was going to lead to this. Even one of her uncles called her to tell her. I think that was how she took the bold step to tell Kalu she wasn’t interested in the relationship any more. We didn’t know it would result in this. Her father and I gave her a stern warning not to ever get involved in any romantic relationship with anyone within her base. That was the prophecy we had. Yes, she told me about Kalu and that was why we had to accept one Sola, who was always calling me, although I have never met him.
Would you say you regret allowing your daughter join the military?
I won’t say that. No regret because the people there are humans too. There is no job that doesn’t come with its own risk. The rest there are humans too and some even grew very old on the job and retired. She had got an admission into the Adeniran Ogunsanya College of Education before she was recruited into the Nigerian Air Force.
So, you don’t have any regret whatsoever?
No, I don’t have any regret. In fact, I don’t mind if the government can compensate the family by recruiting some of her siblings into the military.

See photos of ‘snow’ that fell in Ekiti State on saturday