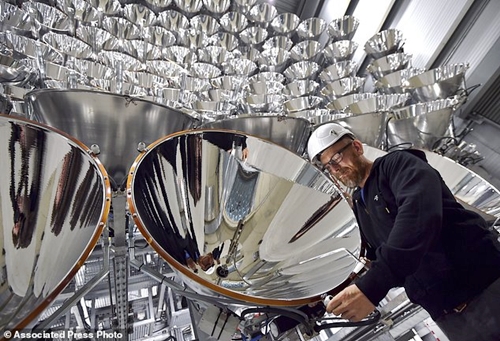 In what has been described as “the world’s largest artificial sun”, Scientists in Germany have flipped the switch in a breakthrough on technology as they hope that it will help shed light on new ways of making climate-friendly fuel.

According to Dailymail UK, the newly launched “Synlight” experiment is made up of 149 high-powered lamps totalling about 350 kilowatts, in Juelich, a small town in the western state of North Rhine Westphalia. Starting on Thursday, scientists from the German Aerospace Center will start experimenting with this dazzling array to try to find ways of tapping the enormous amount of energy that reaches Earth in the form of light from the sun.

“The ‘mummy calm down’ video is a clear case of…

One area of research will focus on how to efficiently produce hydrogen, a first step toward making artificial fuel for airplanes.

The experiment uses as much electricity in four hours as a four-person household would in a year.