Wizkid: My Father Was Against My Music Career 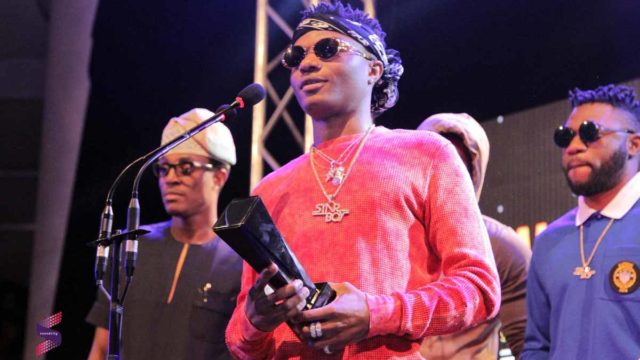 Award-winning Nigerian artiste, Ayo ‘Wizkid’ Balogun whose ‘Come Closer’ video was viewed over a million times in 24 hours recently had a chat with Jasmine Dotiwala of British television station, Channel 4, where he talked about his plans to conquer the international music market, the rise of Afrobeats, among other issues.

Of the topics Wizkid touched on during the five-minute long interview, his disclosure that his father was – in the early days – was averse to his music career was most striking. The singer said his father often wanted him to stay at home and study rather than go to record in the studio.

Wizkid drops what looks like a cover for his “Made In…

Wizkid was once a student of Lagos State University before transferring to Lead City University after signing to Banky W’s Empire Mates Entertainment (EME). “My Dad used to fight me every time. ‘Don’t go to the studio, stay at home and study’. I just had my dreams and I followed them here. But now, people take pictures with him on the streets,” he told Channel 4.

“He’s just so proud, and that’s my joy to make them happy.”

Wizkid said Afrobeats and Afropop sounds will eventually influence the music coming out of the Western scene and ultimately “take over the world”. _ “Music is a universal language, you don’t need to understand what someone is saying to feel the music or love the music. For me, I feel like it’s just gonna bring this industry (Afrobeats) mainstream. It’s going to do a lot, it’s going to contribute, and probably take over the world,” he noted.

“Everyone has a little bit of Afropop sound-inspired. Look at Drake on his last album (“Views”), look at Alicia Keys with what she is doing right now with the sound on ‘In common’. Everything is coming back home.”

Wizkid asserted that music is the only source of joy for people on the African continent, adding that it is what endears Africa to the world.