#BBNaija: Housemates left in tears after their relatives visited, Ebuka Hangs out with them (Watch Video) 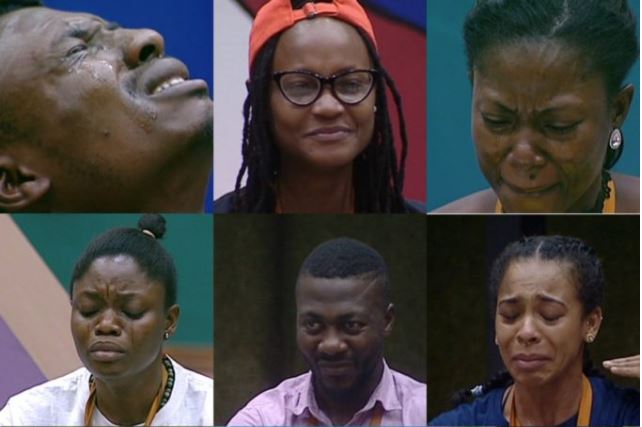 Housemates left in tears: Big Brother made every fan and lover of the show move to tears when the Housemates’ Family/Relatives paid a visit today. Though the housemates weren’t allowed to converse with them, as Big Brother put them on “Freeze mode”.

Earlier this morning, Big brother instructed the housemates to prepare a special meal individually, as they’d be having a special guest later in the day.

They finished preparing the meals, as instructed by Big brother in the morning and sat around the kitchen table playing cards while waiting for Big Brother to tell them it was meal presentation time. Little did they know that this Task formed part of Big Brother’s biggest surprise yet, as members of their families were the special guests!

It was a bitter sweet moment, as Big Brother had the Housemates on freeze mode when the guests came in one by one and told them messages from their families, further tasting the food they had prepared. Almost all the Housemates cried and laughed at the same time upon seeing their relatives and hearing the messages. The Housemates have had visits from various musicians and influential people but never could they imagine getting a visit from members of their families. Bally and Marvis tried their best holding back tears, while the rest could not hold back the tears and just let out their emotions. Even Efe, who has keeping his cool all along, shed a few tears. The guests stayed for a short while, before being whisked away. The Housemates were then told to unfreeze and they briefly cried openly, before Big Brother spoke to them, telling them they had won their Wager and had a reward for them in the Store Room. You can watch the FULL 30 minutes Video Below:

Meanwhile, the Host of the show, Ebuka took a snap with the relatives of the Housemates. Jose Mourinho hits out at Alexis Sanchez over transfer claims