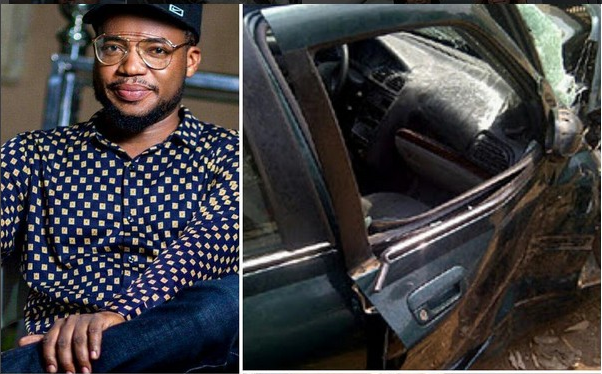 Ayo Olaiya, one of the popular Olaiyas from the descent of impresario highlife musician, Victor Olaiya was recently involved in a ghastly motor accident that nearly took his life. Ayo Olaiya, who has taken after the likes of Moji Olaiya, Akin Olaiya in the Nollywood industry is right now recuperating in an undisclosed hospital in Lagos.

The gory motor accident which took place in an obscure area of Lagos State yesternight was so devastating that lovers of the superlative actor and his colleagues have since been praying for his speedy recovery.

OAP Lolo thanks God as she and her children survive…

Eye witness accounts at the scene of the accident are still wondering how the young talented act would make it out of the unfortunate incident which only lucky mortals can escape.

Ayo Olaiya has featured in many highly-rated movies like Jemiriye; Seven Days, One Cast; Omo Ale; Ara Nla; Awari; Wura Mi amongst many others, and has tagged along with many top-rated actors and actresses in several movies which gave him a top ranking in the movie industry.

Ayo Olaiya, we gathered, was returning from a movie shoot location, before the unfortunate incident happened. His rise to fame in the Nollywood may not be unconnected with his filial relationship with the popular entertainment family, sired by the octogenarian and enterprising Highlife musician, Sir Victor Olaiya, but this is not to whittle down his own inherent artistic talent.