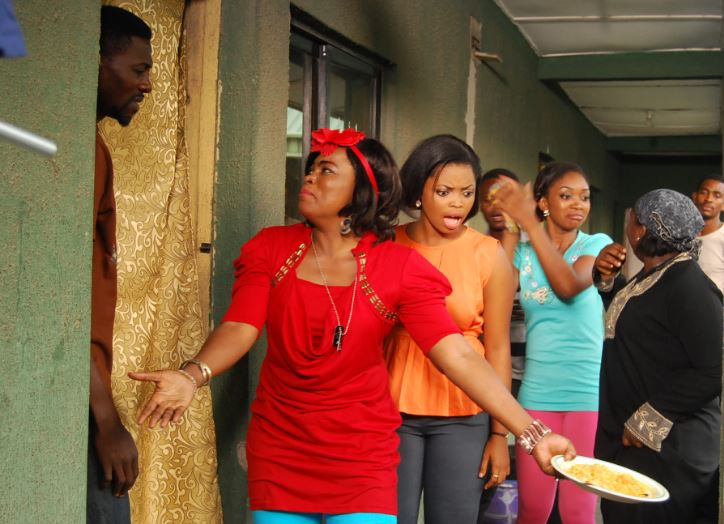 UNOFFICIAL WASHER WOMAN
Aunty Funke is neat and very tidy and she does professional dry cleaning. But there were times she needed a dress washed urgently and I helped her wash. Please don’t accuse me of being proud or rude to Aunty Funke again. I SERVED her WHOLEHEARTEDLY.

UNOFFICIAL COOK
Some of my fond memories with Aunty Funke are the times I cooked for Aunty Funke. I enjoyed cooking for her. I followed someone who lived with her then (name withheld) to market on different occasions to buy things we used to cook. Please note, I had a home of my own. I stayed with Aunty Funke only when we were shooting except times she specifically asked me to come over.

UNOFFICIAL MASSUER
I learnt how to massage with Aunty Funke; I learnt on the job…lol. I knew she was usually tired when we got back so it was my pleasure to relieve her; she sometimes slept off while I massaged her. There was a day we were on location and we did not take the oil. Someone offered oil but as I held it, my spirit was not at peace.

So, I bowed my head and prayed over the oil. I did not know Aunty Funke was watching me. When I opened my eyes, she asked what I did and I told her. Her response was “O se oko mi”, translated, “thank you my dear”.

PRAYER PARTNER
There were different times Aunty Funke called me to pray on location, and sometimes at home. There was a time I gave her a Word of Knowledge. I had a dream once, I told her, and it happened the next day. I fasted and prayed with Aunty Funke and her sister. She called me to pray with her at midnight at some points.

She knew from the onset that I was a Christian and that I was committed to prayer. There were different times we both prayed and asked God to give us sponsors. So, for those that have accused me of being “holier-than-thou”, that is the real me o! Everybody on every set I have gone, including Jenifa’s Diary, know I am unapologetically sold out to Jesus. I am not ‘deceiving’ anybody. That is my ‘real face’…lol