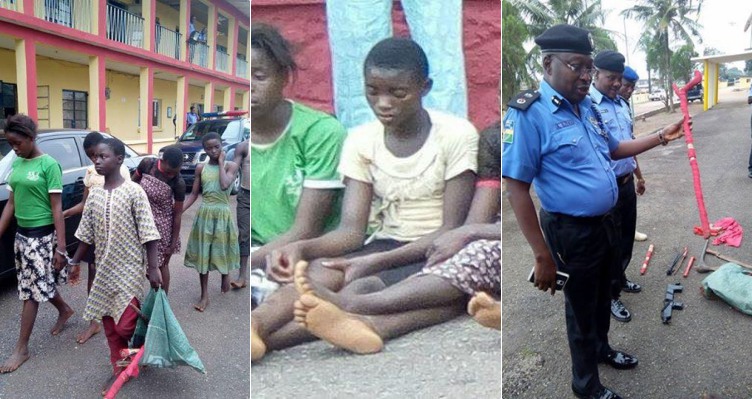 Cult initiation: Four underage girls, whose ages range between 10 and 13, were among the 13 suspected cultists arrested by the police in Ogun State early this week. According to reports, other male members of the suspected group were in their early teens, and their leader slightly older. He is 19 years of age. All the suspects were, at time of their arrests, residents of Mosunmore Village near Kobape in Abeokuta, the state capital. Stunned by the worrisome development, the Baale of the community was said to have alerted the police, sequel to the alarm raised by one of the suspected girl’s mother.

True to the allegation, detectives attached to Owode-Egba Police Divisional Headquarters, led by the Divisional Police Officer (DPO), Shehu Alao, swung into action and succeeded in smoking them out of their camp during initiation of another set of girls.

Speaking on the ugly incident, the state Police Commissioner, CP Ahmed Iliyasu, disclosed to Crimepuzzle that on Monday, August 28, 2017, at about 6:30 pm, a woman raised alarm to the Baale of Mosunmore Village near Kobape, here in Abeokuta, to the effect that her daughter went out late a day previous.

“Apparently disturbed by the said outing, the woman pestered her daughter who later confessed that she was initiated into a cult group, a development the woman found difficult to conceal to herself and alerted the community head who, in turn called in my men.

“Consequently, officers of Owode-Egba Division stormed the area and successfully apprehended the 13 youngsters in the process of initiating yet another set of underaged girls”, CP Iliyasu said.

The girls, all primary six school leavers, confessed to being lured into the group by the boys.

Leader of the group known as “Penalty Guys”, 19-year-old Tunde Adio, narrated to Crimepuzzle how he was initiated by one Tosin, also a resident of the community in January, 2017, adding that they came about their own group’s name during the last Easter celebration when his third-in-command, 13-year-old Adewale Raphael’s church was organizing a picnic.

According to Adio, “we decided to do customized vests, with the the inscription “Penalty Guys”. This was what attracted the girls and agreed to be initiated”.