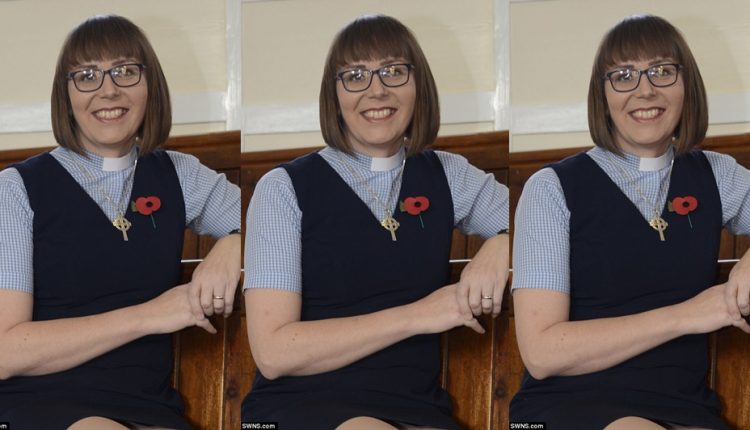 A university chaplain, Joy Everingham, has become the Methodist Church’s first transgender minister, after hiding her true identity for more than four decades. from Canterbury, Kent, spent years secretly applying lipstick and wearing women’s clothes before finally coming out as transgender three years ago. After receiving the full support of senior church leaders, the 46-year-old broke the news to her parishioners in a notice handed out before a service.

According to Daily Mail,Joy says she first knew she was different aged just five, and ‘didn’t fit in with everyone else’. The mother-of-two has since been living full-time as a woman, and 18 months ago started taking cross-sex hormones.

‘I wasn’t like the boys, I was always more like the girls.
‘My dad used to joke “I’ve got three kids, one of each”, so I was obviously different – I couldn’t hide it.

She told senior church leaders of her plan to transition, receiving their full support, before revealing it to her new congregation in a notice handed out before a service.

She got married to her bestfriend, Ruthh when she was 22.For eight years, Ruth was oblivious to the secret life her husband was living, unaware he was hiding clothes in the loft and continuing to dress as a woman.

‘Ruth loves me for who I am, but she’s still attracted to men. I’m not sure she is really attracted to me sexually anymore, but we’re still in love and we’re still best friends. She still sees me as the same person, I just look a bit different.
‘Transitioning has made our lives easier, it has become wonderfully normal.
‘There have been times when it’s been difficult, but it’s actually made our marriage better, because I’m suddenly content with myself, and the struggle isn’t there anymore.
‘But I’ve had people shout ‘freak’ at me in the street and I know people who have been beaten up in Canterbury just for walking home.

I Am Not An Attention Seeker- Gifty