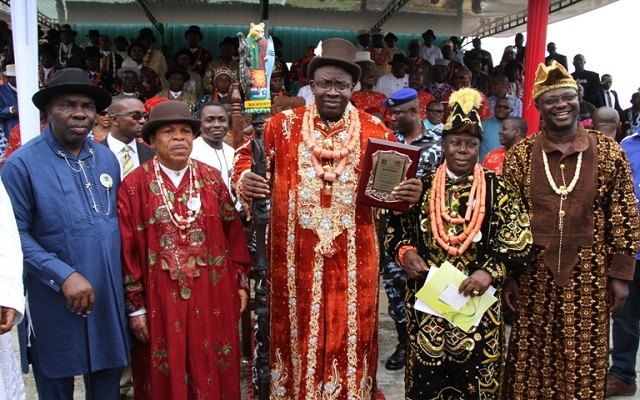 Just like the nomadic cattle herders in Nigeria, the Ijaws are another itinerant ethnic nationality in the over 250 ethnic groups in the country. For the Hausa/Fulani herdsmen, they are everywhere. As a youth in this country, the cattle herdsmen were very friendly people and they were good visitors to almost all communities. They were hardly associated with armed robbery, kidnap, rape and murder as has become their pastime lately. These nefarious activities have even led to states enacting anti-open grazing laws to curb the criminality that nomadic herdsmen have lately constituted themselves into.


On their own part, the Ijaws who were concentrated and owned lands in the place known as Bayelsa and have from ancient times been known for travelling through the coastal areas to anywhere there is river to ply their trade of selling Ogogoro (local gin) in parts of Rivers, Edo and Ondo states. From the sales of Ogogoro, they became settlers in these states, Edo and Ondo in particular.

The history of Benin is well known to all Nigerians and the world. The Benin Kingdom is respected because of the blue blood progeny of the successive Obas. The kingdom reigned from the location of the palace in modern day Benin City to Dahomey. That is why the history of Benin Kingdom is clear on the Oduduwa story. An attempt by some Yorubas to re-write history led to Oba Erediauwa’s “I remain Sir, Your Obedient Servant,” a treatise he used to educate all Nigerians who were on the wrong lane of history to get their facts right.

All of these come readily to mind given that the Governor of Edo State, Mr. Godwin Obaseki, recently compelled by necessity of his duties as the Chief Executive Officer and Chief Security Officer of the state to call on Ijaws of Edo State not to take the State Government’s tolerance of their presence in the state for granted.

One also remembers vividly in the days of Navy Captain Anthony Ibe Onyearugbulem an igbo man as Military Administrator of Edo State in the early ‘90s when some Ijaws also took the laws into their hands in Ovia North East, unleashing mayhem on some Binis in Gelegele and attempting to install a “Kingdom” within a kingdom. Onyearugbulem who was not even from Edo State saw it as a clear affront on the Benin Kingdom and an attempt by some misguided Ijaws to want to take undue advantage of the benevolence of Edo people.

It wasn’t much of surprise, therefore, to hear Governor Obaseki unequivocally stating that his government is “proud of our diversity as a state and our peaceful coexistence, but will not tolerate acts of illegality by any group, who, for their selfish desires, want to rail-road the peace-loving Ijaw people of Edo State into a criminal aspiration.

He also stated that “we are creating a culture that appreciates human diversity in all its colours for a robust pool of ideas that would drive socio-economic development at an unprecedented speed in Edo State. The laws of our land is clear on traditional leadership of all communities from the beginning of the 1st century till date. For someone to plan to oppose what is cast in law by acts of illegality such as the purported installation of one Godwin Oguyenbo, as the “Pere of Olodiama Kingdom,” an Ijaw community in Ovia North East Local Council Area of the state, is not just irresponsible but a calculated attempt to fan the embers of disunity and stifle the planned development of the Gelegele sea port which the Obaseki -led APC administration has been championing since assumption of office a year ago.

The ijaw in Bayelsa states should call their kinsmen resident in Edo to order to avoid unnecessary conflict that will be of no benefit to the Ijaw people.

Edo people are peace-loving and hospitable people. Majority of Ijaw people in Ovia North East and South West of Edo State are equally peaceful people who have co-habited with the Edos in these areas peacefully over the years. The peace-loving Ijaws should not allow themselves to be dragged into the voyage of death being embarked upon by those behind the so-called installation of “Pere of Olodiama Kingdom” in Edo land.

The traditional leadership structure in Edo State is well known to all over the centuries and no insane man can come to alter the structure. It is also important to call on all Edo people both at home and in Diaspora to rise up and stand shoulder to shoulder with government on its directive to have peace in the state.