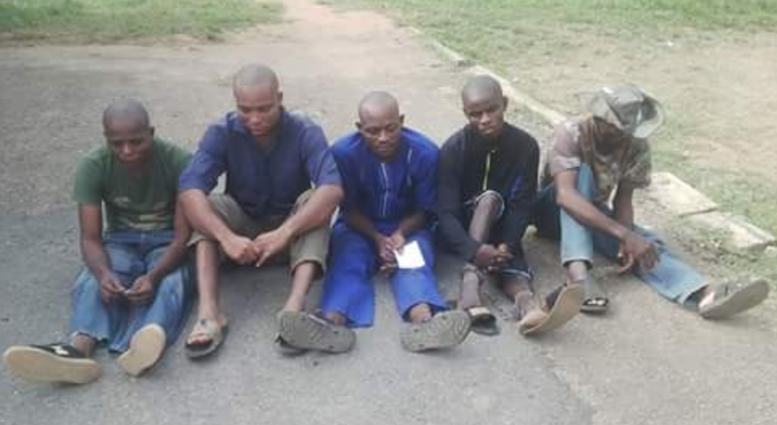 Robbery gang: A soldier, Corporal Akapan Edet aged 28 serving at the 81 Battalion, Mokola, Ibadan has been arrested along with four others for hijacking a fuel Laden truck along Akobo, Iwo road on 17 /11/ 20117. The criminal gang, according to investigation, is responsible for waylaying and subsequent hijacking of trucks along expressway. The gang led by the soldier who was clad in full military camouflage on the aforementioned date at about 2130hrs, hijacked a 40,000 litre truck with Reg. No ABJ 132 XA and abducted the driver and his motor boy to Omi-Adio area after robbing them of their valuables.

The truck was thereafter driven to Ilese/Akure road by some of the gang members. The victims raised alarm which brought about the arrest of the suspects by Special Anti robbery squad of the command. Three other members of the gang were later arrested in their criminal hideouts in ibadan. The suspect confessed to the said crime. Suspects (1) Cpl Akpan Edet (2) Onyeka Joshua (3) Onhonwen Raphael (4) Ugo Monday (5) Ifeanyi Emmanuel.

The special Anti-Robbery Squad of the command recently arrested an employee of George Investment Company, Ibadan who stole six Sino trucks, and a Toyota Camry car belonging to the company that were entrusted in his care. Upon petition by the CEO of the company, Wang Shou Bo,a Chinese. On the 27/11/ 2017 the command SARS carried out a discreet investigation which led to the arrest of the suspects in Edo and Abuja. The six trucks were sold to a criminal receiver in Kaduna at rate of 20million while a Toyota Camry was given to a yet to be identify Pastor in Abuja. The six trucks and two cars was recovered back and receiver arrested as well. The suspects (1) Olaronbi Saheed (2) Abdulkareem Yusuf (3) Ibrahim Babankulu the criminal receiver.

Three members of armed robbery gang arrested by the Command. The suspect who until their arrest belongedto a dare-devil armed robbery gang responsible for the spate of robbery in some parts of Ogun and Oyo States. The gang have successfully attacked innocent residents of Sanda community,Molete and robbed them of valuable property. A member of the gang was however arrested by Felele Division on 7/12/ 2017 while fleeing from scene and recovered cut to size single barrel gun. Further investigation by SARS led to the arrest of other two members with another cut to size gun. Suspects (1) Olorunkemi Abiodun (2) Abimbola Segun (3) Taye Shittu. Exhibit recovered two cut to size barrel guns, two laptops, Eight mobile phones, a mask and criminal charms.

On 19/12/2017 at about 1630hrs, one Yusuf Ishola aged 30 was arrested with two hundred and ninety four pieces of counterfeit 1000 naira note. The suspect and one other at large often fraudulently used the fake naira to purchase expensive items from unsuspecting individuals and notable shops in Ogbomoso and other parts of the state.