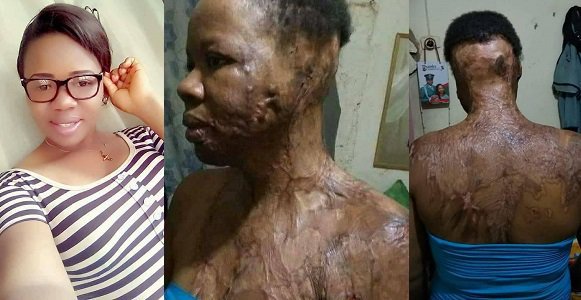 Miss. Nkiruka Jane Nnaji, a graduate of Nnamdi Azikwe University from Amorji Akpugo in Enugu State, who apparently, was awaiting her youth service before she was attacked with acid, has lamented following the attack. According to the lady, the acid attack occurred on April 11, 2017 in Port-harcourt around 8pm while she was on her way back from the cosmetic shop she was managing. She wrote;

“It happened on April 11, 2017 in Port-harcourt. After my graduation I went into cosmetic business; I got a very small shop where I was managing. I was coming back from my shop that fateful day, at about 8:00 pm; I was walking to the house when I started hearing a male voice calling ‘Chi-chi’. I thought it was somebody that wanted to toast me; I thought it was a way of attracting my attention.”

“I didn’t really give him any attention. When he kept calling that name I felt it could be a way of taking my phone or robbing me so I put my phone in my bag and in less than three seconds somebody tapped me on the shoulder.”

UNIZIK student dies after being hit by stray bullet fired by…

“Immediately I turned, he poured the acid substance which was in a small container on me and I screamed. He ran away while I was screaming and shouting for help. People came out, poured me water and eventually they took me to the hospital that very night.

“I was in the hospital in Port-harcourt there for two weeks before I was referred to National Orthopaedic Hospital Enugu. When I went to Orthopaedic, the next day they went on strike; I went into coma because then the wound had already been infected because the hospital where they took me wasn’t a burns hospital. So they did not take proper care of the wound so it was bringing forth pus and was smelling.

So I went into coma and was rushed to a private hospital, Hill-top; it was there I had two surgeries and stayed there for 35 days after paying over N1m.

“I was taken back to Orthopaedic, by then they had called off the strike; it was there that I had the remaining three surgeries. So altogether I have gone through 5 plastic surgeries in the cause of this acid attack.

“I don’t know because I never quarreled with anyone. If I had quarreled with anyone may be by now I may have arrested the person. So I don’t really know. I take this to be a mistaken identity because the name he was calling wasn’t my name. My name is not Chi, or Chinyere or anything related to that. And the person didn’t wait to see the face of the Chinyere he was calling. So maybe he took me to be Chinyere and poured me that substance”.

“Even that very night they say they caught the person. But they thought he stole my phone because they heard me screaming. They saw him with an android phone and they confronted him accusing him of having snatched the phone from the girl that was screaming. He said no it’s his phone. They said ok, if it’s your phone, call the number. They dialed the number and it rang and they gave him back the phone and he left. So it was while I was in the hospital the person brought the number to me. I called the police and gave my statement but they asked me to pay N70,000 to track the number alongside other expenses. I didn’t have much money and I needed even more for my treatment so couldn’t raise the money. After my statement they left and I didn’t hear from them again till today”.

Upon her condition, Jane has refused to question God. “I know my God has a reason for whatever happens. He is still my God and has seen me through even when doctors gave me 30% chances of survival. I am grateful to Him for keeping me alive.”

Orezi Calls Out A Celebrity Owing Him (Photo)