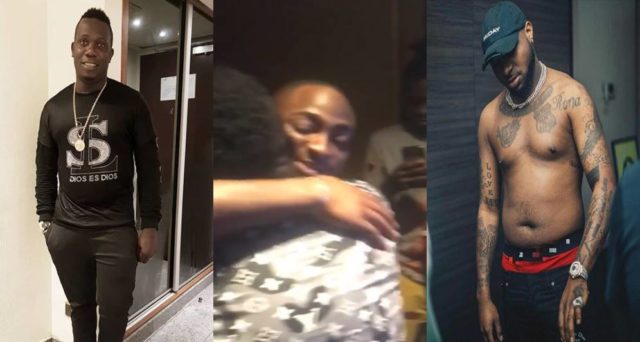 Duncan Mighty had taken to his Instagram page to share the video of him, Davido and other musicians in the studio wherein he tried to prostrate to Davido as well as thanking him for collaborating on a song. He said Davido has elevated him, the entertainment industry in Port Harcourt, and the entire Niger Delta by that act.

He also thanked Davido for flying to Port Harcourt with his private jet for the video. However, while some fans applauded him for the video, others seem to be displeased with Duncan Mighty for trying to, or, even prostrating to Davido at all. Below are the tweets of the reactions:

He captioned the video;

“BREAKING NEWS! HISTORY IS BEEN MADE AS DUNCAN MIGHTY COLLABORATES WITH NIGERIAN INTERNATIONALLY ACCLAIMED MUSICIAN @davidoofficial OBO & PERRUZI IN A MUSIC PROJECT THAT WILL OPEN UP THE ENTIRE NIGER DELTA REGION AND SET THE PACE FOR AN UNPRECEDENTED GROWTH OF THE ENTERTAINMENT INDUSTRY.
WHICH WILL BE THE BIGGEST POTENTIAL NON OIL INVESTMENT OF THE NIGER DELTA REGION. THE VIDEO WILL BE SHOT BY CLARENCE PETERS RIGHT HERE IN PORTHARCOURT TODAY..CHAI OBO U CAME VISITING ME WITH UR PRIVATE JET AND CHIOMA UR LOVER GOD BLESS U FOR THIS HONOR. Costume RIVERS ATIRE SHOOT STARTS 11am.”

Duncan Mighty is falling the hands of his supporters lmaoooo