A Nigerian man has shared a video of a young lady who reportedly alighted from a Lexus SUV and ran mad immediately, drawing assumptions that she must have been used by ritualists and yahoo plus boys.

In the video, which started recording late after she came down from the car, the young lady can be seen covered in dirt and speaking gibberish.

When they say stay with your broke boyfriend,ladies won’t listen…Guys are desperate ladies beware…This happened today at Ijebu-ode after she got down from a Lexus jeep

I just saw a video of a very young beautiful girl. According to what I saw, she’s at Ijebu Ode. Unfortunately, she’s mad and has been used by ritualist or yahoo boys.

Few weeks back, I tweeted about a young girl I saw at Jakande roundabout which was also mad. 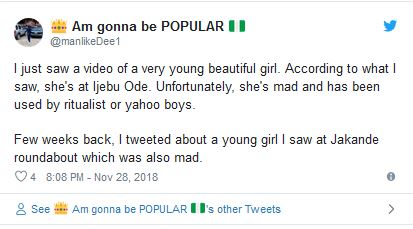 More details on lady who ‘ran mad’ after being dropped by Lexus SUV in Ijebu Ode – Her name, School and age (Photos)