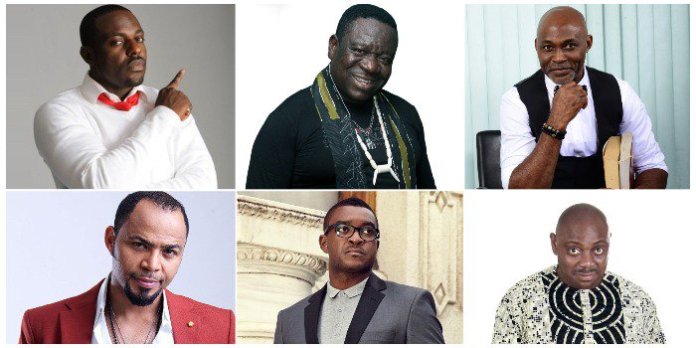 Let’s talk about the highest paid actors in Nollywood. Who are they? How much money do they have? How have they reached the level of popularity that could bring them their riches? We will try to answer all of these questions here. So come on in and find out just how much their pretty faces are worth.

Now, unfortunately, we do not know exactly how much each of the actors we are going to talk about has earned this year. None of them seems like the sort who likes to boast about how much money he has made from a single movie.

With that out of the way, let’s talk about Nigerian actors that have been the luckiest this year in terms of their paychecks, starting with our number 10.

Most of the people reading this article have probably seen at least one movie featuring the legendary Pere Edochie during their lifetimes. Born on March 7, 1947, the man is a veteran of Nollywood with a career spanning over almost decades. Fame came to him with a role of Okonkwo, the protagonist of a book-based movie ‘Things Fall Apart’. Since then, the actor has won multiple awards for his outstanding performances, including the Lifetime Achievement by Africa Film Academy.

Even though he is not a young man anymore (the man has stepped into his eight decade), Edochie is still a very desirable actor in Nollywood. It is interesting to note that he once belonged to G8, a group of A-list actors who were banned from acting for a year back in the early 2000s for charging outrageous fees. Now we are even more curious to learn how much the actor earns per movie today!

It is hard to believe, but the next actor on our list has a very similar life story to our №10. Even though Nkem Owoh is younger than Pete Edochie (he was born on February 7, 1958), he has starred alongside the older actor in ‘Things Fall Apart’ and was a ‘member’ of G8. We have not mentioned it before, but both men were kidnapped in 2009, which only makes the similarities between them stand out more.

To take things further, they even starred alongside one another in the directorial debut of Genevieve Nnaji in ‘Lionheart’ (2018). This movie seems to be quite a big deal, as it is the first ever original Nigerian film that has been acquired by Netflix.