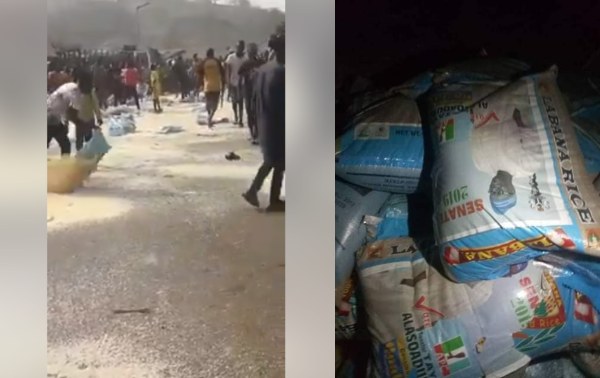 Tragedy struck over the weekend as Truck with failed brakes carrying APC-branded rice rammed into a market in Ekiti. The accident which led to the death of many, made angry youths in the area destroy APC campaign rice.

The accident reportedly killed a mother, her child, a Youth Corps member, traders and some students of the Ekiti State University in the town. The angry youths who stormed the scene of the incident to protest, destroyed the APC campaign rice which was branded with the campaign stickers of a senatorial candidate of the All Progressives Congress (APC) in Ondo State.

The accident which occurred in Iworoko Ekiti, which is home to a large number of students of Ekiti State University due to its proximity to the institution’s main campus, had so many dead victims because it occurred when the market was at its peak.

Mayorkun sets up barbing salon for his uncle in Lagos