BBNaija: ‘Tacha is someone I admire and I’m definitely going to settle our fight’ – Mercy

On the penultimate week before the Grand Finale of the Big Brother Naija “Pepper Dem” show, Mercy and her fellow housemate, Tacha had a fight in the house, which apparently led to the disqualification of the latter.

Mercy who at the end won the Season 4 of the reality TV show has finally reacted to their bitter brawl, as well as the Tacha’s axing from the house.

During a press conference today, with the winner of the show, Mercy and first runner up, Mike as well the other 3 runner-ups, Seyi, Frodd and Omashola; Mercy declared that Tacha is someone she admires a lot, and she’s ready to settle with her.

“Tacha is someone I admire and I’m definitely going to settle with her as regards whatever had happened between us.”, Mercy said while answering a question from a journalist. 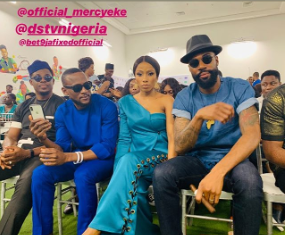 Mercy being the winner for this year’s edition will be going home with cash prize of N30m, SUV from Nigerian automaker, Innoson Motors. Other prizes are trip to Dubai; a home make-over: a year’s supply of Pepsi and One Africa Fest VVIP experience; a year’s supply of Indomie noodles & Munch it; a brand new Oppo mobile smartphone. There’s also a bonus prize of two VIP Tickets to watch a European Football final game LIVE, courtesy BET9ja.