Nollywood Yoruba Actress, Bidemi Kosoko has reacted following the eviction of former BBNaija housemate, Diane and she couldn’t hide her disdain towards the Kaduna based Diane.

Nollywood veteran, Jide Kosoko’s daughter was excited that Diane didn’t make it to the final. One can tell where the hate is coming from, she is a Tacha fan.

READ ALSO! Checkout the reaction of Osita ‘Paw Paw’ Iheme after actress Bidemi Kosoko placed his head on her bre*st 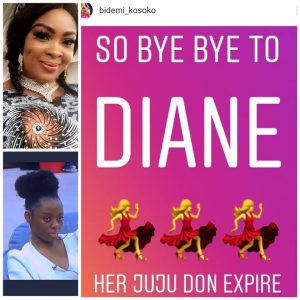 This was actress Bidemi Kosoko’s reaction after Diane was evicted from the Big Brother House last night. See the rest of her comment as well as a reply to a follower who attacked her for the comment..