10 Nigerian celebrities nobody cares about anymore (With Pictures) 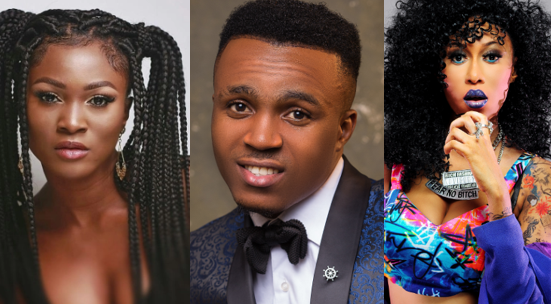 A Nigerian parlance states that Soldier come; Soldier go but barracks still remains. We all know what that means (sincere apologies to our non-Nigerian readers). Over the years, both recent and past years, we have had different celebrities grace our screens but not everyone of them stayed on the pedestal they attained for a long time.

These Nigerian celebrities have faded from the public eye and drawn back into obscurity. Some of them were good back then, while others never even had an ounce of talent to begin with. Regardless, these 10 celebrities are so obscure now that we find ourselves just not caring what they’re up to these days. Do you agree Modupe-Oreoluwa Oyeyemi Ola (born October 16, 1990), popularly known as  Mo’Cheddah (sometimes stylized as Mocheeda or Mocheddah), is a Nigerian rapper and singer. She released her debut studio album, Franchise Celebrity (2010), while signed to Knighthouse Entertainment. The album was preceded by the 2009 promotional single “If You Want Me”. She parted ways with Knighthouse in February 2012 and established her own label, Cheddah Music Nicknamed the Nigerian Backstreet Boys, you can’t talk Nigerian Music and not mention Styl Plus. They took the game to a whole new level. Show me that guy in his mid 20s who didn’t use one of their famous love songs to woo his secondary school crush those years. The other day, I stumbled on the Olufunmi video on Youtube and it was as though I was seeing it for the first time and lowkey wished they had a remake of the song.

The group Styl-Plus (originally STYL) is a Nigerian R&B and pop musical group / quartet.[1][2] The founding members were Shifi Emoefe, Tunde Akinsanmi, Yemi Akinwonmi, and Lanre Faneyi, the name STYL being an abbreviation of the founders first names.

In 1998 Lanre Faneyi died, and Zeal Onyecheme joined the group. This led to the group being renamed Styl-Plus, the “Plus” denoting the new addition to the group.

In 2002 Yemi Akinwonmi left the group and the musical band became a trio without adding a new member. Starting 2003, the group had its own record label, STYL-PLUS. In February 2017, it was reported that Tunde Akinsanmi left the group in 2012, leaving Shifi and Zeal as the flag bearers of the group. Djinee: I’ve always had it difficult pronouncing his name 😆 . Little did Nigerian talented vocalist know that he would be the one everyone would be searching for and not Ego. Djinee is one talent most Nigerians wished would go on to be the face of R n B in the music industry but a lot of circumstances impeded that. Osayamwen Nosa Donald, is a Nigerian musician, song writer, producer and TV presenter. Djinee was once a Veejay at Soundcity before he began singing professionally in 2005. In 2018, the singer was involved in a ghastly car accident but survived and went through a long rehabilitation process. Cynthia Ikponmwenosa Morgan (born 23 September 1991), popularly known by her previous stage name Cynthia Morgan, now Madrina, is a Nigerian born songwriter and singer. Her music is a fusion of pop, hip hop, dancehall and rap. She shot into limelight following the release of two singles titled “Don’t Break My Heart” and “Lead Me On”, which received massive airplay and positive reviews from critics. Cynthia made her acting debut in a 2016 Nollywood movie “The Wrong Number” Directed by Saint Joseph ovensehi, and Ay’s comedy movie A trip to Jamaica Olumide Edwards Adegbulu aka Olu Maintain rose to prominence on May 2007 with the release of the hit song “Yahooze” which literarily hail internet fraud and lavish spending from his debut studio album, Yahooze (2007), and a second album, Maintain Reloaded (2008). He featured Big Bamo in the single “Kowonje”. “Yahooze” was named Hottest Single of the Year at the Nigeria Entertainment Awards. Olu Maintain’s “Yahooze” was the genesis of an open declaration of support for internet fraud and lavish spending by an “A list” artiste which is now a norm in the Nigeria music industry. Bracket are a Nigerian afropop and R&B music duo composed of Obumneme Ali a.k.a. “Smash” and Nwachukwu Ozioko a.k.a. “Vast”.[1] Bracket started as a three-man music group before a member called Bistop dropped out. The duo are currently signed to Ape Planet and are best known for releasing hit singles like “Happy Day”, “Yori-Yori” and “Ada Owerri” which received several positive reviews and airplay