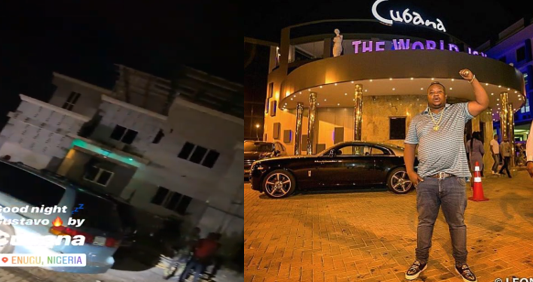 Nigerian socialite and King of nightlife,  Paschal Chubuike Okechukwu popularly known as Cubana Chief Priest has added to his chain of nightclubs across the country.  The Cubana Group owner alongside his CEO, Obi Cubana is set to launch Gustavo by Cubana in Enugu before the year runs out. Gustavo by Cubana as disclosed by Chief Priest would be the 8th nightclub owned by businessman. He revealed the names and locations of the 7 Cubana clubs currently running. See them below: He further revealed that the aim is to hit 10 clubs across the country and take one year break before resuming expansion and delving into hotel and liquor stores. TheInfoNG gathered that Gustavo by Cubana, Enugu is due to be completed and open for business by December 2019.

Watch video of the nearly completed Gustavo below:

In related news, It seems the relationship between reality TV Star, Mercy Eke and Popular king of nightlife, Cubana Chief Priest has had a dent in recent times. The promoter, who threw full support for his kinsman, Mercy Eke by canvassing for votes and support for her, deleted all her photos and videos from his social media and unfollowed her. The only remnant of anything relating to Mercy on Cubana’s page is a photo of the homecoming event that was organised for Mercy at Owerri last week. Read more

All you need to know about Cubana Chief Priest – Real name, friendship with Davido, Net worth & more (Pics)