A ‘leaked image’ of the Ballon d’Or results list appears to reveal Lionel Messi as the winner, beating Liverpool’s Virgil van Dijk to the award.

Messi is the heavy favourite to lift the trophy on Monday evening in Paris, ahead of Virgil van Dijk. 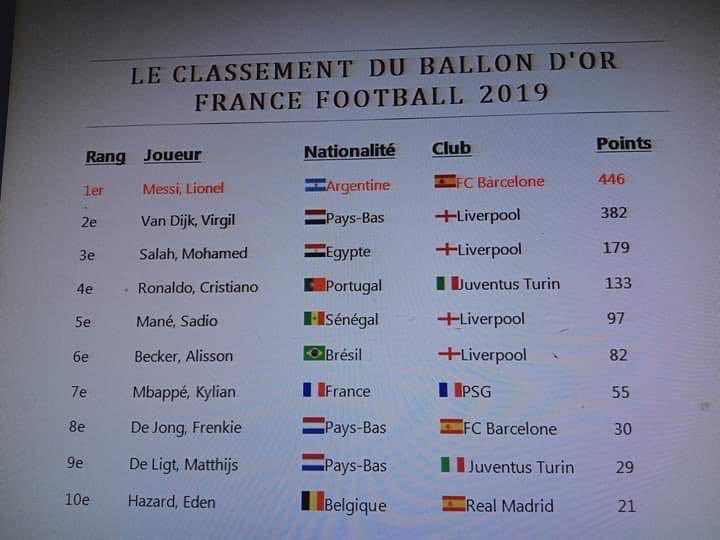 And according to the list, which purports to be the final classifications after voting for this year’s award, the Messi is set to top the pile once more, 64 votes ahead of the Dutch stopper.

There is a strong presence for the Reds on the list, with Mohamed Salah making up the top three, while Sadio Mane and goalkeeper Alisson Becker come in at fifth and sixth respectively.

But according to the alleged document, which has found its way online, Van Dijk will not become the first defender since Fabio Cannavaro in 2006 to scoop the prize, finishing 64 points behind in second.

Instead, Barcelona star Messi will win it for a record sixth time and move one clear of Cristiano Ronaldo, with the pair tied on five each.

Ronaldo, the Juventus star, is apparently in fourth behind another Liverpool star Mohamed Salah, with the official announcement to be made in Paris today and a new winner replacing Luka Modric.

“Didier Drogba is using Iphone 6, i cant come and kill myself” – Nigerians react on Twitter to Drogba’s phone at Ballon d’or awards

“No one deserves Ballon d’Or more than Cristiano Ronaldo” – Perez

France football releases list of nominees for Ballon d’Or as Ronaldo and Bale comes first – See others who made the list!