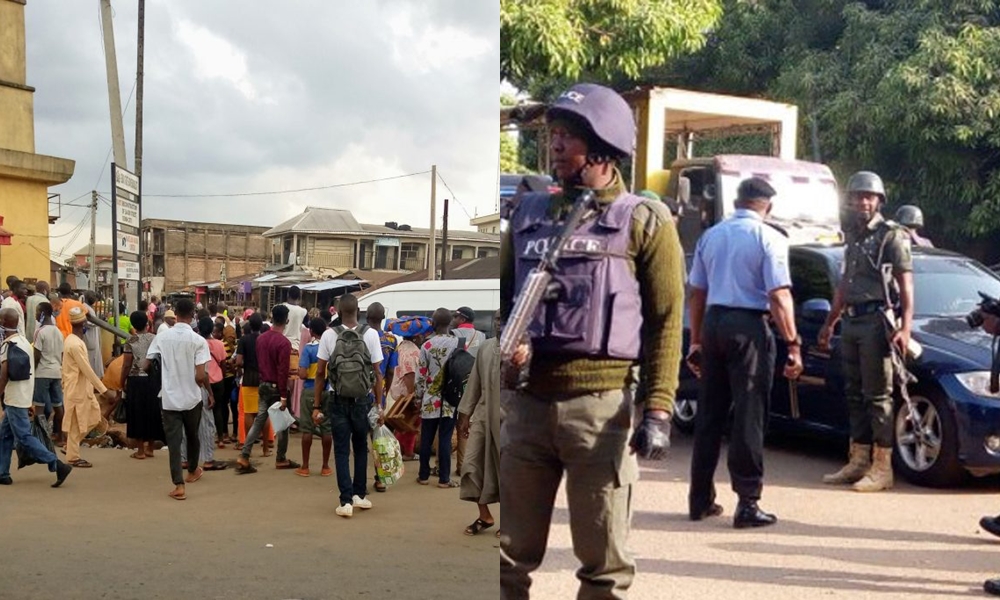 Some police officers and Nigerian Security and Civil Defence Corps operatives, allegedly beat up a soldier, for not wearing face mask in Benin city, Edo state.

On Saturday, May 9, 2020, there was pandemonium in Lagos street, Benin city, barely 24-hours after the state government shut down the street to all business activities over alleged refusal of traders and residents of the street to comply with the directives to participate in the ongoing screening and testing exercise for Coronavirus, as part of efforts to contain the pandemic.

Trouble started when the unidentified soldier who was on the street was asked to put on his face mask by the Police and NSCDC officials.

According to an eyewitness who spoke with PM News, the soldier who was on military khaki short had a handkerchief on his neck and his wife did not properly put on her face mask.

“On entering Lagos Street, the soldier and his wife were asked to wear their face mask by the policemen on duty. The soldier brought his ID card to identify himself but the police officer dismissed the ID card as fake.

“The soldier got infuriated when one of the police officer pushed his wife with a gun in a bid to force her to wear the face mask.

“Following the argument that ensued, the policemen descended on the soldier and injured him on the head with the butt of their gun,” he said.

Traders and passers-by were forced to run in different directions, as men of the Nigerian Army who later stormed the area, allegedly shot repeatedly into the air to scare the police and NSCDC officers.

Quick intervention by officers of the Nigerian Army and the State police command, quelled the situation.

The feuding parties were later driven to the nearby Oba Market Police division to resolve the issue.

We are back in training – Nigerian football star, Shehu Abdullahi shares picture from Turkish club, Bursaspor