Instagram Comedian, Josh2Funny Ties The Knot With His Fiancee 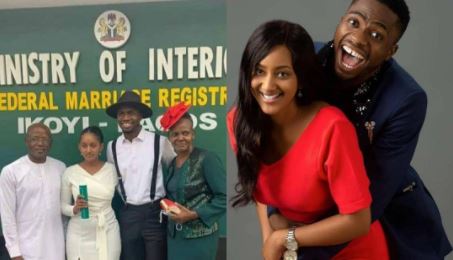 In what comes as quite happy news, comedian Josh2funny is now a married man!

The skit-maker tied the knot with his fiancee at the Ministry of Interior, Federal marriage Registry Ikoyi in what was a low-key affair.

The couple got engaged in October 2019.

You have no worth – Shade Ladipo slams Mercy Aigbe…

A good wife should derive pleasure in watching her man lie…

Josh2Funny real name Josh Alfred took to Instagram back then writing, “Them don collect me oooooo 🙈,”.

LMAO! All My Guys Are Ballers

Today is also Josh2funny’s birthday as he turns 29-years-old.

The skit-maker was born in Anambra state and spent some of his formative years there before moving down to Lagos state when he was 7-years-old.

Growing up in the Mushin area of Lagos State, he met with other like minds and at a point, started considering delving into comedy. In fact, he started developing comedy sketches long before Instagram launched.

He studied Computer Science at the Federal Science and Technical College, Yaba.