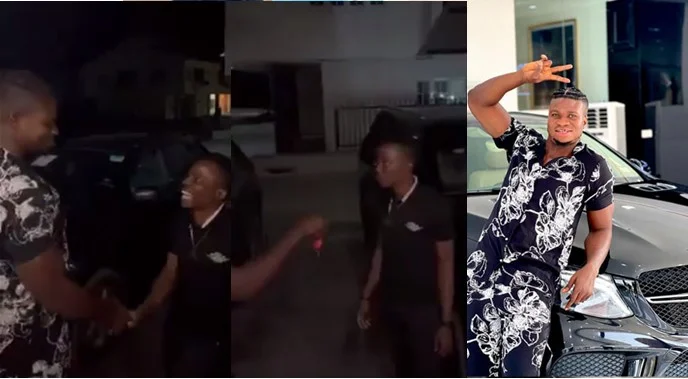 Popular skit maker, ZicSaloma, gave Max Crony, a longtime friend and coworker, one of his old automobiles, a Lexus. The Instagram comedian threw Crony the keys to the car after buying himself a Mercedes-Benz, which he claimed was his ideal vehicle.

A few days ago, Zic Salama uploaded wonderful pictures on Instagram to announce the purchase of his Benz; “My New Baby…Daddy loves you”, he captioned. He claimed that he understudied his colleague and didn’t like the fact that the other skit-maker travels to shoot locations in an Uber, which is why he decided to give Max Crony the automobile.

Because of his high blood pressure, the companion begged the skit creator not to play a practical joke when Zic handed him the car keys.

Crony hopped aboard Zicsaloma and shouted in glee as he realized the car was now his. He affirmed his admiration for the comic while kneeling down and holding his legs.

Days after acquiring a Benz, Skitmaker ZicsAloma gifts one of his old cars to his friend/colleague, MaxCrony