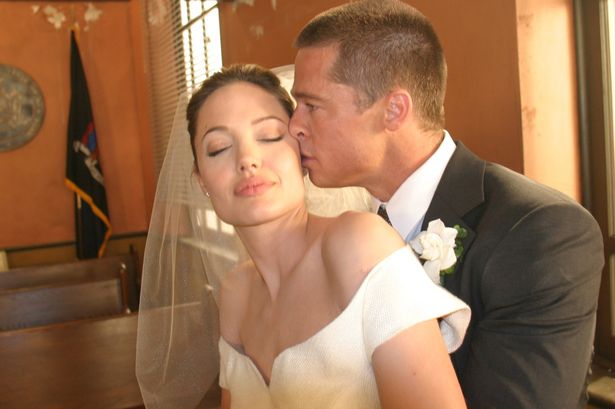 Share
For those of you aching for a peek at what Angelina Jolie and Brad Pitt looked like on their wedding day…here’s some filler.

In honor of the marriage of the year so far, super-secret or otherwise, let’s enjoy these photos of a radiant Jolie and hunky Pitt getting ready to swap vows—Angie in her bright-white wedding dress holding a bouquet and Brad in a simple suit and tie—on the set of Mr. & Mrs. Smith in 2004.

The sexy action flick, which hit theaters in 2005, starred the duo as bored married assassins who come to quite the crossroads in their relationship—neither is wise to the fact that the other is a professional killer, and that each has been hired to bump the other off.

At one point, the Smiths look back on their wedding day as a simpler time as the pair attempt to reconnect.

Spoiler alert: They succeed, and memorably take out all the bad guys in the process.

But how about Jolie in that gown and veil? And look how young Brad looks with that buzz cut!

Ten years later…they’ve still got it, don’t they?

Brad and Angelina said their I-dos in the chapel on the grounds of their home in southern France, Château Miraval.

Madame Tussauds got in on the fantasy Brangelina wedding action today, too, dressing the wax figures of the couple in the chain’s Sydney location in wedding garb (A canary-yellow dress for Angelina? Really?) and setting them up with a cake and confetti.

It’s official: Everyone the world over, from the States to Down Under, is super-excited about Brad and Angelina.